He was picked to play for the Indian cricket team in December 2004 and has been a regular member of the Indian one-day international team since then. His success in the limited overs format has also secured him a Test spot, and he is rapidly becoming one of the most famous & marketable icons in India, noted for his shoulder length hair.

Dhoni (affectionately known as Mahi), made his debut for Bihar in the 1999-2000 season as an eighteen year old. He started off his career with modest performances at the local level. He was noticed by the national team selectors in 2004 after his performances in first class tournaments such as the Deodhar Trophy and the Duleep Trophy. Dhoni was selected to represent India 'A' on a tour of Kenya and his performances were good enough to win him selection in the Indian national team, making his one-day international debut against Bangladesh in Chittagong in December of that year.

Dhoni's best performance for India thus far is an unbeaten score of 183 off 145 balls against Sri Lanka at Jaipur on 31 October 2005, equalling the second best score by an Indian in ODIs. It was also the highest innings recorded by a wicket-keeper, and the highest number of sixes in an innings for a wicketkeeper with ten (all-rounders Sanath Jayasuriya and Shahid Afridi have hit 11). He also broke Saeed Anwar's record of most runs scored off boundaries by scoring a total of 120 runs off 4s and 6s eclipsing the previous record of 118. [1] This has broken the record for the highest individual score for a team batting second. This has also established the new Indian record of number of sixes in a match, overtaking previous record holders, Sachin Tendulkar and Sourav Ganguly (both hit seven sixes in a match). Earlier, in 2005 he scored 148 against Pakistan in Vishakapatnam, in his fifth one-day international; the score came off only 123 deliveries 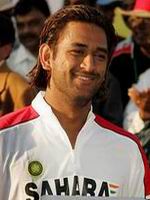 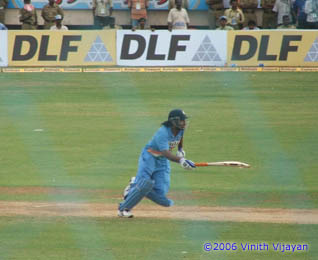