In the face of death, Danny’s spirit of defiance and his unflinching belief in the power of journalism led Mariane to write about his disappearance, the intense effort to find him and his eventual murderer in her memoir A Mighty Heart: The Brave Life and Death of My Husband Danny Pearl. Six months pregnant when the ordeal began, she was carrying a son that Danny hoped to name Adam.  She wrote the book to introduce Adam to the father he would never meet. Transcending religion, race and nationality, Mariane’s courageous desire to rise above the bitterness and hatred that continues to plague this post 9/11 world, serves as the purest expression of the joy of life she and Danny shared.

Starring Academy Award® winner Angelina Jolie (Girl, Interrupted) as Mariane Pearl, and Dan Futterman, Oscar®-nominated for his Capote screenplay, as Daniel Pearl, A Mighty Heart is directed by Michael Winterbottom (The Road to Guantanamo, Tristram Shandy) and produced by Brad Pitt and Dede Gardner for Plan B Entertainment (Year of the Dog, THE Departed) and Andrew Eaton for Revolution Films (The Road to Guantanamo). John Orloff (BAND OF BROTHERS) wrote the screenplay.

The night Danny disappeared, Mariane kept vigil with Asra Nomani, an old friend and colleague of Danny’s at the WSJ, living in Karachi.  Both women were seasoned international journalists with formidable investigative skills, but they were also foreign women in a country that had become increasingly volatile since September 11.  By dawn, they knew they were facing a crisis that required strong allies fully briefed on Pakistan’s proliferating terrorist cells, its byzantine bureaucracy and its notorious Inter-Services-Intelligence agency (I.S.I.).

Dozens of local investigators swarmed the house that morning, including a man called Captain, the then head of Pakistan’s brand new counter-terrorism unit. With Asra’s house as headquarters, Captain’s men, along with an American diplomatic security agent, two Journal colleagues and the FBI, dedicated themselves to the search.  After five harrowing weeks, amidst escalating media frenzy, they found the kidnappers.  Among them was the known militant Omar Saeed Sheikh, aka “Bashir,” the go-between who had offered Danny information relating to the shoe bomber story.  Then came the devastating news that Danny had been brutally murdered weeks earlier.

Mariane and Danny believed that by bearing witness to events and allowing all voices to be heard, truthful journalism could bridge communities in conflict.  Mariane has remained devoted to this principle, refusing to succumb to hate or fear.  After Danny’s death, she went home to her native France to await Adam’s birth.  She and Adam now live in Paris, France.

In the 5 years since Daniel Pearl’s death, over 230 journalists have been killed in the line of duty.

On January 23, 2002, Mariane Pearl’s world changed forever.  Her husband Daniel, the South Asia Bureau chief for the Wall Street Journal, was researching a story on shoe bomber Richard Reid.  The story drew them to Karachi where a go-between had promised access to an elusive source.  As Danny left for the meeting, he told Mariane he might be late for dinner.  He never returned. 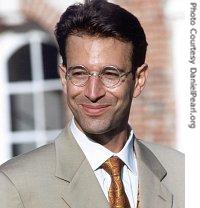