2SpaceCube
Thirty-two people are now known to have been killed when Cyclone Gonu struck the Gulf country of Oman, emergency officials say.

Rescue teams are searching for another 30 people who are reported missing.

The storm was the strongest to hit the Gulf for decades, damaging buildings and trees in Oman's capital, Muscat, and leaving many roads flooded.

High winds and heavy rain were also reported, and electricity and water supplies were interrupted.

The cyclone has carried on north-west, gradually weakening as it approaches the Iranian coast.

Residents along the coast of southern Iran have moved to higher ground and sought shelter in schools and mosques.

There have been three reported fatalities, when a river in the southern port of Jask burst its banks and floodwater overturned a vehicle. 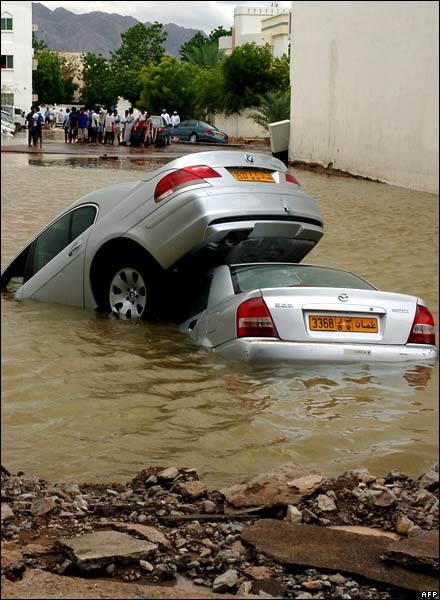 People in the Omani capital, Muscat, are continuing a clean-up operation, removing uprooted trees and overturned cars, and clearing away piles of mud.

Some areas are reported still to be without electricity and phone services, after lines were blown down.

Police had warned people in Muscat to stay indoors during the storm and the streets had been largely deserted. Some 20,000 people were evacuated in the oil-rich sultanate.

Omani ports were closed and flights were suspended at Muscat airport.

However, shipping continued in the Strait of Hormuz, which carries up to 40% of world oil supplies.

Cyclone Gonu diminished in force in the 24 hours before it struck Oman.

It had peaked two days earlier, with a maximum Category Five designation over the Arabian Sea.

A cyclone is the meteorological name for hurricanes in the Indian Ocean and western Pacific.