Rescue efforts were underway in the southern provinces of Hunan, Guizhou, Guangdong and Guangxi, as the floodwaters swept through mountainous regions prone to landslides. Nearly 9 million people were directly affected by the flooding, and factories and other enterprises have been closed in some areas, according to Xinhua, China's official news agency.

Torrential rain has killed at least 66 people in floods, house collapses and rockslides across southern China with more heavy rain predicted for this week.

The National Meteorological Centre forecast heavy rain south of the Yangtze River, China's longest, and continued downpours in the south of the country until Thursday.

One official said the rain had stopped in the north eastern Guangdong city of Meizhou where a local government Web site showed pictures of people standing waist deep in brown flood waters and others filling sandbags to keep the waters at bay.

From Wednesday to Saturday, continuous rain, mudslides and floods hit the provinces of Hunan, Guangdong, Guangxi, Guizhou, Jiangxi and Fujian.

China's typhoon season is just getting under way in the south.

Experts last month warned that the Yangtze could flood badly this year for the first time since 1998 when flooding killed more than 3,000 people.

Residential houses are partially submerged after heavy rains hit Lianzhou, in China's southern Guangdong Province, Thursday, June 7, 2007. Continuous rain have inundated roads, houses, farmland through out areas of south and central China displacing hundreds of thousands from their homes. More rain is expected in the following days according to the weather forecast given by the National Meteorological Bureau
7SpaceCube 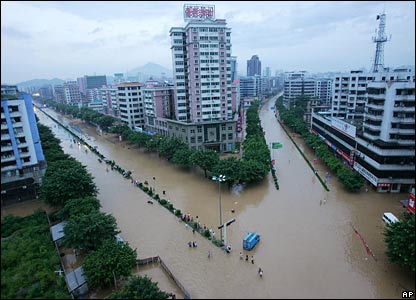 9SpaceCube
At least 150 people have died in China as a result of tropical storm Bilis, which struck the south of the country over the weekend.
10SpaceCube 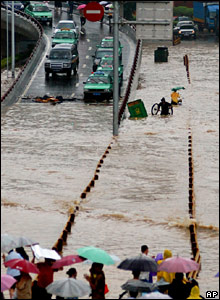 11SpaceCube
The storm brought torrential rain which led to landslides and widespread flooding in the provinces of Hunan, Guangdong and Fujian.
12SpaceCube
Rescuers have been working to reach residents stranded by high flood waters.
13SpaceCube 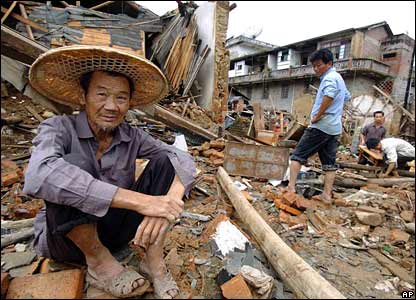 14SpaceCube
Thousands of houses have been swept away and many people have been forced to flee their homes. 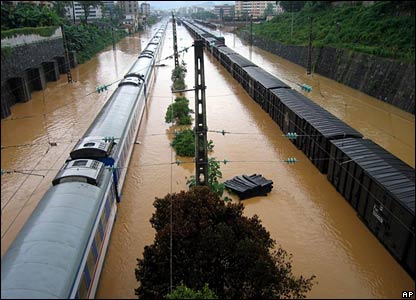 16SpaceCube
Communications and infrastructure have been affected. In Guangdong, flooding cut the Beijing-Guangzhou railway line, stranding thousands of passengers.
17SpaceCube 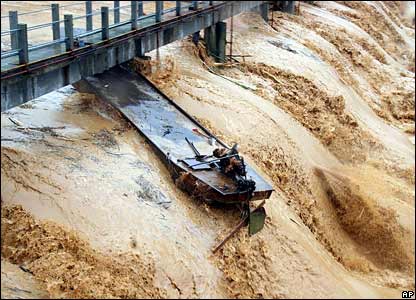 18SpaceCube
Mudslides have been reported and forecasters fear that more bad weather is on the way, with several days of heavy rain predicted in southern China.