Ancient Egypt -- a land of mysteries. No other civilization has so captured the imagination of scholars and laypeople alike. Mystery surrounds its origins, its religion and its monumental architecture: colossal temples, pyramids and the enormous Sphinx.

The Egyptian pyramids are the most famous of all the ancient monuments, the only remaining wonder of the seven wonders of the ancient world.

Just as life arose from the waters, the seeds of civilization were first sown along the banks of the Nile. This mighty river, which flows north from the heart of Africa to the Mediterranean Sea, nourished the growth of the pharaonic kingdom. The long, narrow flood plain was a magnet for life, attracting people, animals and plants to its banks. In pre-dynastic times, nomadic hunters settled in the valley and began to grow crops to supplement their food supply.

Seen as a gift from the gods, the annual flooding of the river deposited nutrient rich silt over the land, creating ideal conditions for growing wheat, flax and other crops. The pharaohs were seen as gods, divine representatives on earth who, through rituals, ensured the continuation of life. After death, they became immortal, joining the gods in the afterworld.

The Egyptians also believed that the body and soul were important to human existence, in life and in death. Their funerary practices, such as mummification and burial in tombs, were designed to assist the deceased find their way in the afterworld. The tombs were filled with food, tools, domestic wares, treasures -- all the necessities of life -- to ensure the soul's return to the body so that the deceased would live happily ever after. 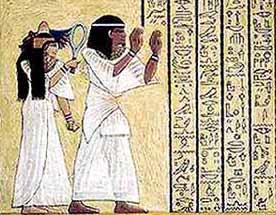