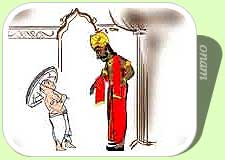 17SpaceCube
Pulikali / Kaduvakali Pulikali is a colorful recreational folk art from the state of Kerala. It is performed by trained artists to entertain people on the occasion of Onam. Pulikali, also known as Kaduvaakali, is a 200 year old art, carefully preserved by the artists of the state. Literal meaning of Pulikali is the 'play of the tigers' hence the performance revolve around the theme of tiger hunting. The folk art is mainly practiced in Thrissur (Trichur) and Palghat districts of Kerala. Best place to watch the show is Swaraj Ground at Thrissur on the fourth day of Onam, where Pulikali troupes from all over the district assemble to display their skills. The Appearance Striking feature of this folk art is the colorful appearance of the performers. To get the semblance of a tiger artists paint themselves in bright yellow with patterns of black and red. A tiger mask on the face completes the get up. It is a painstaking job and artists spend a whole night prior to the performance day on their make-up. Patience of artists must be appreciated, as most paints contain toxic chemicals which create a burning sensation when applied on newly shaved bodies. The Play It is a wonderful sight to see humans in the guise of tigers roaming in the streets. Children, specifically take great delight in their performance as the entertainers dance, pounce and walk like a tiger. Scenes of tiger hunting goats and tiger being hunted by a human beings are also beautifully depicted by them. Beat for the dance movement is provided by percussion instruments like 'udukku' and 'thakil'. Onam Dance Kummatti kali | Pulikali / Kaduvakali | Kathakali | Thumbi Thullal | Kaikotti kali Related links About Us | Contact | Feedback | Links | Visitors Feedback -------------------------------------------------------------------------------- Copyright © Society for the Confluence of Festivals in India (SCFI). All Rights Reserved
18SpaceCube

20SpaceCube
Thumbi Thullal Thumbi Thullal is a fascinating all women dance and singing event performed in Kerala on the occasion of Onam. While men engage themselves in energetic sports, womenfolk perform Thumbi Thullal and have their share of fun. Wearing their best sarees, stunning jewelery and fragrant gajras, a group of women sit in the formation of circle to play Thumbi Thullal. In the centre of the circle sits the main performer. Lead singer initiates a song in her melodious voice by singing the first couplet which is taken up by other women. The sequence continues song after song with the lead singer initiating the couplet every time followed by a chorus from other women. Joyful clap dance also goes on in rhythm with the singing. It is a colorful spectacle to watch women in their carefree mood. The event continues amidst jeers and laughter till the day comes to its end.
21SpaceCube 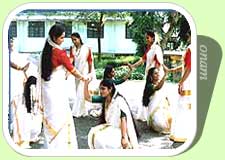