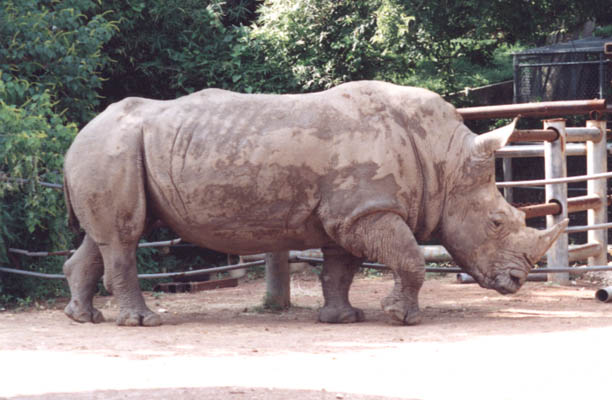 6SpaceCube
commonly called rhino for brevity) is any of five surviving species of odd-toed ungulates in the family Rhinocerotidae. All five species are native to Africa, the Middle East, and southern Asia. Most species of rhino are endangered. Rhinoceros is also one of the genera in this family.

The word "rhinoceros" is derived from the Greek words rhino, meaning nose, and keras, meaning horn; hence "horn-nosed". The plural can be either rhinoceros or rhinoceroses. The forms rhinoceri or rhinoceroi are sometimes seen, but these are generally considered hypercorrections. The proper Greek plural, rhinokerōtes (ρινοκέρωτες), is in disuse.

The family is characterized by: large size (one of the few remaining megafauna surviving today) with all of the species capable of reaching one ton or more in weight; herbivorous diet; and a thick protective skin, 1.5-5 cm thick, formed from layers of collagen positioned in a lattice structure; relatively small brains for mammals this size (400-600g); and its horn. The rhino is prized for its horn. Not a true horn, it is made of thickly matted hair that grows from the skull without skeletal support. Rhinoceros also have acute hearing and sense of smell, but poor eyesight over any distance. Most rhinoceros live to be about 50 years old or more. The collective noun for a group of rhinoceros is "crash".

A powerful rhinoceros, though herbivorous, is arguably one of the deadliest creatures on earth to humans. In India and Nepal, rhinos cause the greatest number of wildlife-related human deaths each year, surpassing those caused by tigers and leopards. They have even been known to charge working elephants carrying tourists through the jungles. Much like other animals, they are most dangerous when in the presence of their young.

The rhinoceros can be classified as "monoceros" (meaning an animal with one horn).