3SpaceCube
Marion Jones born on October 12, 1975 in Los Angeles, California, is an American athlete, winner of five medals at the 2000 Summer Olympics. She holds dual citizenship from the USA and Belize (where her family is from) and she marks her victories with the flags of both nations. Excelling in both basketball and athletics (she was a participant in the 1992 World Junior Championships), Jones focused on basketball, playing on the North Carolina team that won the NCAA Women's Championship in 1994. When Jones lost a spot on the 1996 Olympic team because of an injury, she decided to concentrate on athletics. She immediately won her first major international championships, becoming the 100 metre World Champion in Athens in 1997, while finishing 10th in the long jump. At the 1999 World Championships, Jones attempted to win four titles, but injured herself in the 200 m after a gold in the 100 m and a long jump bronze. Off the track, Jones married shot putter C.J. Hunter, who was a coach on the University of North Carolina track team, in 1998. Hunter was required to resign his position at UNC because of school rules that prohibited coach-athlete dating. She won both the 100 m and 200 m with remarkable ease, but placed third in the long jump to Heike Drechsler, in an event where she had the necessary speed but lacked technique. The two relay events yielded her two more medals, but only one gold. The Bahamas and Jamaica both beat the American team in the 4 x 100 m, but the American victory in the 4 x 400 m was comfortable. Her husband was banned from the same Olympics after having tested positive for nandrolone. They divorced a year later. A dominant force in women's sprinting, Jones was upset in the 100 m at the 2001 World Championships, as Ukrainian Zhanna Pintusevich-Block beat her in the 100 m, her first loss in the event in years. In the 200 m and 4 x 100 m, Jones did win the gold. In 2003, Marion Jones gave birth to a son, Tim Jr., named after his father Tim Montgomery, who broke the 100 m World Record in 2002. Because of her pregnancy, Jones missed the 2003 World Championships, but spent a year preparing for the 2004 Olympics. On her 2004 Olympics experience, she came in fifth in the long jump and competed in the women's 4 x 100m relay where they swept past the competition in the preleminaries only to miss a baton pass in the final
5SpaceCube 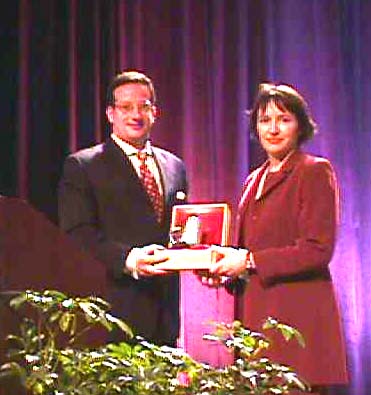 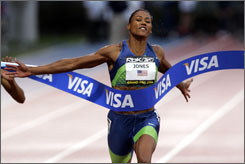 10SpaceCube
Marion Jones Biography - "i Want To Be An Olympic Champion",
9SpaceCube