Anil Kumble was born on 17 October 1970 at Bangalore in Karnataka. Right arm leg break bowler, he has played for Karnataka in the Ranji Trophy Championships and has represented Northamptonshire and Leicestershire in the County Championships. Kumble made his One Day International debut  against Sri Lanka in the Australasia Cup of 1989 and his Test debut against England in 1990. In 85 Test matches, he has already captured 400 plus wickets (only the second Indian to do so after Kapil Dev), with 10 for 74 (only the second bowler to capture all ten wickets in an innings after Jim Laker of England) against Pakistan as his best figures and has scored nearly 1,500 runs. In One Day Internationals, he has taken 321 wickets, with 6 for 12 as his best figures and has scored 886 runs.Kumble, an engineer by profession is a highly

focused cricketer, with high self-esteem. He bowls leg breaks at a pace that is uncomfortable to batsmen and mixes them up with well-disguised googlies and flippers â€“ deliveries that pitch

and skid through without turning. A good batsman at the first class level, he has not been able to impress at the international level, despite a one-off performance when the team needs it. He fields well at Gully. He has perhaps won

more Test matches for India off his own bowling than any other cricketer, including the famed spin quartet, though his image is not as glamorous.

He bids fair to become the highest wicket taker for India in less than a yearâ€™s time and has gone on record that, his form and fitness permitting, he will capture 500 and more wickets in

Tests. Aggressive on the field, Kumble is the quintessential gentleman off it and has been a great ambassador for Indian values over the last decade and a half.Kumble is an executive with a topnotch watch company in Bangalore and has gone into business with his brother to create Cricketing software solutions. 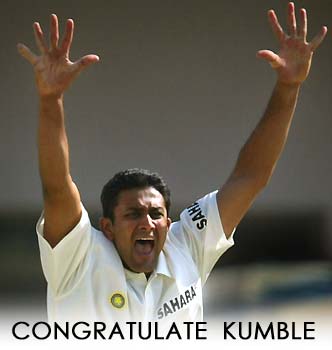 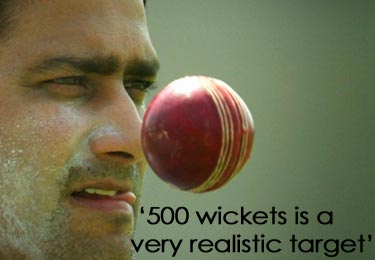 Credits of Picture and video