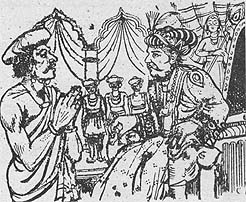 Raja Birbal (1528-1586) was a courtier in the administration of the Mughal emperor Akbar and one of his most trusted members along with being a part of Akbar's inner council of nine advisors, known as the 'navaratana', a Sanskrit word meaning 'nine jewels'. Birbal's duties in Akbar's court were mostly military and administrative but he was also a very close friend of the king, who liked Birbal most for his wit as well as his wisdom, as a result of which they frequently had witty and humorous exchanges between them.