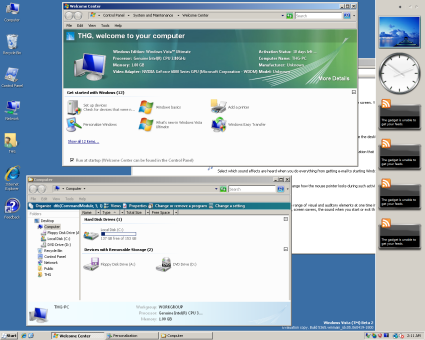 Windows Vista is a line of graphical operating systems used on personal computers, including home and business desktops, notebook computers, Tablet PCs, and media centers. Prior to its announcement on July 22, 2005, Windows Vista was known by its codename "Longhorn".[1] Development was completed on November 8, 2006; over the following three months it was released in stages to computer hardware and software manufacturers, business customers, and retail channels. On January 30, 2007, it was released worldwide to the general public,[2] and was made available for purchase and downloading from Microsoft's web site.[3] The release of Windows Vista comes more than five years after the introduction of its predecessor, Windows XP, making it the longest time span between two releases of Microsoft Windows.

Windows Vista contains hundreds of new features; some of the most significant include an updated graphical user interface and visual style dubbed Windows Aero, improved searching features, new multimedia creation tools such as Windows DVD Maker, and completely redesigned networking, audio, print, and display sub-systems. Vista also aims to increase the level of communication between machines on a home network using peer-to-peer technology, making it easier to share files and digital media between computers and devices. For developers, Vista includes version 3.0 of the .NET Framework, which aims to make it significantly easier for developers to write high-quality applications than with the traditional Windows API.

Microsoft's primary stated objective with Windows Vista, however, has been to improve the state of security in the Windows operating system.[4] One common criticism of Windows XP and its predecessors has been their commonly exploited security vulnerabilities and overall susceptibility to malware, viruses and buffer overflows. In light of this, Microsoft chairman Bill Gates announced in early 2002 a company-wide 'Trustworthy Computing initiative' which aims to incorporate security work into every aspect of software development at the company. Microsoft stated that it prioritized improving the security of Windows XP and Windows Server 2003 above finishing Windows Vista, thus delaying its completion.[5]

Windows Vista has been the target of a number of negative assessments by various groups. Criticism of Windows Vista has included protracted development time, more restrictive licensing terms, the inclusion of a number of new Digital Rights Management technologies aimed at restricting the copying of protected digital media, and the usability of other new features such as User Account Control