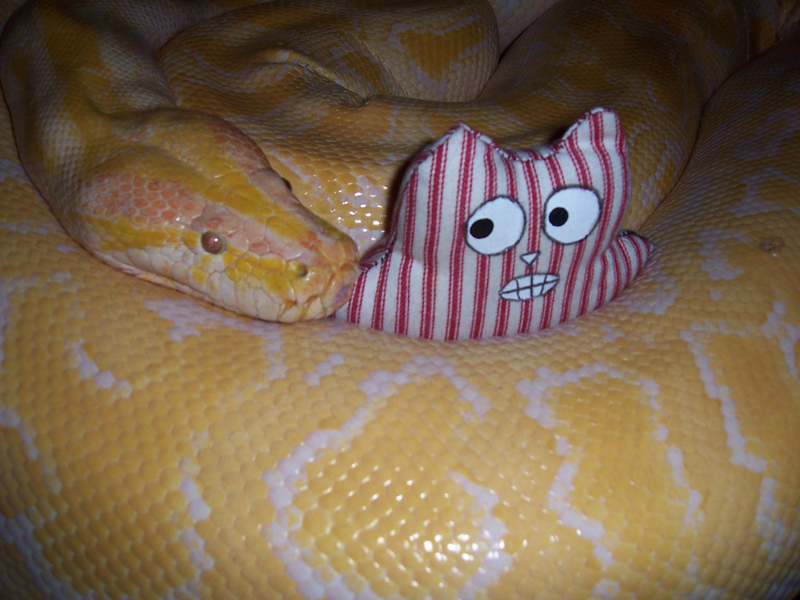 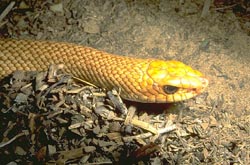 The Jamaican Boa or Yellow Snake (Epicrates subflavus) is black and yellow in colouration.  Reported sightings of snakes up to 3 metres (10 ft.) in lenght have been made.

The Boa feeds on birds, rats and other small animals.

Destruction of habitat through deforestation and development.

Predation by introduced species, such as dogs, feral cats and mongoose which eat the young.

Outright killing on sight by man, owing to the mistaken belief that they are dangerous. They are not poisonous.

Why They Need Protection

The Boa have always been considered as being rare, by virtue of its secretive and largely nocturnal habits.

The status is unknown.  Most of the available reports on the occurrence of this species relates to encounters with outlying village communities and/or cultivation areas.

The Yellow-faced Whip Snake is a slender and fast-moving snake, active during the day. It is common throughout most of Australia. It is often confused with the Eastern Brown Snake, and it is hard to observe closely, being alert and fleeing quickly when disturbed.

This snake is found in a wide range of habitats, except swamps and rainforest, from the coast to the arid interior.

It is pale grey to brown in colour, with reddish colouring on the head, and sometimes on the tail as well. The belly is grey-green to yellowish. A dark comma-shaped streak runs from the eye to the corner of the mouth. The face is usually but not always yellowish, with a narrow, yellow-edged dark bar around the front of the snout from nostril to nostril. The average length is 80cm, with a maximum of 1m. Males are larger than females. It can be distinguished from the Eastern Brown by its facial markings, and smaller size.

The Yellow-faced Whip Snake feeds mainly on small diurnal lizards, as well as frogs and lizard eggs. They have good eyesight, and can chase and capture lizards on the run. During winter it may shelter beneath rocks, and has been observed aggregating with several other individuals on occasion.

It lays eggs in early summer in the south of its range, with clutches of 5-20 eggs (the average is six) being recorded. Communal egg-laying of up to 200 eggs, in deep soil or rock crevices, has also been reported.

It is a venomous snake, but is not considered dangerous. However, a bite could be extremely painful, with much local swelling.

Yellow rat snakes look similar to most other rat snakes as hatchlings. They have a greyish ground color with darker blotches. The blotches are lost as the snake grows and a 3' snake might not have any traces of blotches left. In some parts of its range, though, the blotches remain to varying degrees and you might find one with stripes AND blotches. Pictured to the right is one that is less than a year old and the yellow color is starting to come in. The photo above is the same snake about a year later.

Yellow rat snakes can be very aggressive when encountered in the wild, but most settle down in captivity and can be maintained like most other colubrids.