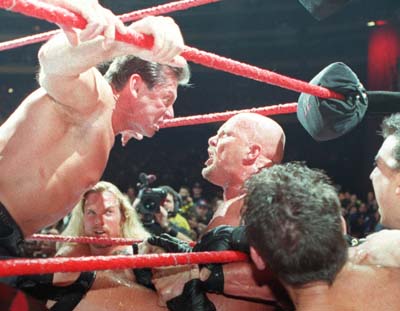 Mr. McMahon is the on-screen character of Vince McMahon, with the gimmick of an often egotistical heel boss. The character spawned from the real-life hatred many wrestling fans had for McMahon following the Montreal screwjob, the 1997 Survivor Series incident with Bret Hart.

Although Mr. McMahon was loathed for his actions as the evil owner of the WWF, the character proved to be one of the most memorable heels in professional wrestling history. Despite Mr. McMahon's evil intentions, many fans continue to respect the character for the history it's had, particularly with "Stone Cold" Steve Austin, who was Mr. McMahon's nemesis at the character's apex. Much to Mr. McMahon's horror, "Stone Cold" was announced to return and was the special guest referee at the "Battle of the Billionaires" match at WrestleMania 23.

Several other gimmicks have become integral parts of McMahon's on-camera persona, such as his throaty exclamation of "You're fired!", and his "power walk" - an over-exaggerated strut towards the ring, swinging his arms and bobbing his head from side to side in a cocky manner. This is usually accompanied by a comment from Jim Ross, such as "There's only one man I know that walks like that." The power walk is used to get a reaction out of the audience (especially when he's a heel), but it also provides comic relief as well. WWE Superstar John Cena had joked on the RAW Exposed special that aired before WWE Homecoming, that Vince "somehow walks like he's got a broomstick shoved up in his ass". According to Jim Cornette, the power walk was inspired by one of Vince McMahon's favorite wrestlers as a child, Dr. Jerry Graham. However, The Fabulous Moolah claims in her autobiography that the original Nature Boy, Buddy Rogers, was the inspiration.