Boeing 787 Dreamliner is a mid-sized, wide-body, twin engine jet airliner currently in production by Boeing Commercial Airplanes and scheduled to enter service in November 2008. It will carry between 210 and 330 passengers depending on variant and seating configuration. Boeing has stated that it will be more fuel-efficient than earlier Boeing airliners. It will also be the first major airliner to use composite material for most of its construction.

Until January 28, 2005, the 787 was known by the developmental designator 7E7. Early released concept images depicted a radical design with highly curved surfaces. On April 26, 2005, a year to the day after the launch of the program, the final look of the external 787 design was frozen, with a less rakish nose and a more conventional tail. Boeing featured its first 787 in a roll out ceremony on July 8, 2007 at its assembly factory in Everett, Washington. The first test flights are not on a fixed schedule but are expected in spring 2008 after having been planned to start earlier. 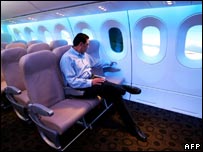 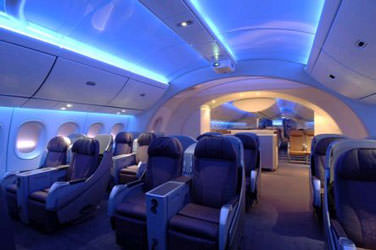