In the mid 50s he joined Fidel Castro's movement that eventually seized power from the then Cuban dictator General Batista. After establishing the socialist system in Cuba, Che Guevara went on with his idea of fomenting revolutions in Latin America and travelled to Bolivia in 1966.

A year later his squad was surrounded and the wounded leader was seized and later killed. Ten years ago his remains were transported from Bolivia to Cuba and buried in a mausoleum in the Cuban city of Santa Clara. Che Guevara became an icon and a major figure of pop culture worldwide.

Che Guevara honored on 40th anniversary of his death

For decades a global symbol of rebellion, Ernesto 'Che' Guevara is honored with ceremonies in Cuba, where his myth was forged, and Bolivia, where he was executed 40 years ago spreading the gospel of Marxist revolution.

The main ceremony in Cuba at Santa Clara, a town 300 kilometers (186 miles) east of Havana, where the Argentine-born doctor-turned-guerrilla leader fought a battle during the Cuban revolution in 1958 and his remains are buried. Che's Argentine widow Aleida March was at the event, along with his children Aleida, Camilo, Celia and Ernesto. Guevara had a daughter with his first wife, a Peruvian revolutionary, both of whom are dead. The ceremony was headed by "a leader of the revolution," the daily Juventud Rebelde reported Sunday, without specifying if it will be convalescing leader Fidel Castro, 81, or his brother Raul, the country's interim president since Fidel underwent stomach surgery in July 2006. 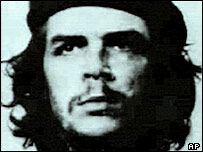