Yang Huiyan born in 1981 is the majority shareholder of Country Garden Holdings and is currently considered the wealthiest person in Mainland China, with a net worth of about $16.2 billion USD as of October 2007.  She is the daughter of Yang Guoqiang, who transferred 70% of Country Garden's shares to her before its IPO. Yang is a 2003 graduate of Ohio State University. 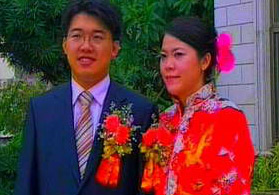