Blessy is a Malayalam film director and a writer. After learning the trade as assistant director to seniors like Padmarajan and Lohithadas, he made his directorial debut in 2004 with Kaazhcha, and followed up in 2005 with Thanmathra. His movies gave a break to the long running 'super human' movies in Malayalam, giving way to natural and sentimental stories. Both his movies, after limping in the box office for the first few weeks, rebounded strongly. Blessy won the Kerala State Award 2005 Best Director and Best Script writer for the film Thanmathra, which also won 3 other awards including Best Actor for Mohanlal, Best Film and a special mention for a child artist Arjun Lal. His latest movie is Palanku(2006).

Blessy used to watch at least one or two films a week at Deepa Theatre near his house in his hometown Thiruvalla. Later he joined Sudarsa Film Society, Thiruvalla. The film society movement helped him gain an insight into the aesthetics of cinema. Later he spent years working as assistant to the late film director Padmarajan. Those were the years that shaped his outlook on cinema. His favourite Padmarajan films include Oridathoru Phayalvan, Kallan Pavithran and Nammuku Parkaan Munthirithoppukal.

His films are now eagerly awaited as each of his films are different from one another and don't seem to be repetition. 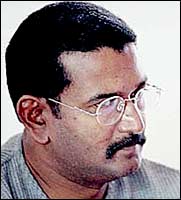