K.P.A.C. Lalitha was born as Maheshwari Amma in Ramapuram near Kayamkulam, Kollam, Kerala on 25 February 1948. Her parents were Kadaykatharayil Veettil K. Ananthan Nair and Bhargavi Amma. She has brother and sister: Krishnakumar and Shyamala. She learned dance when she was still a child from Kalamandalam Gangadharan. She started acting in plays when she was 10 years old. Her debut play was Geethayude Bali. She later joined the K.P.A.C. (Kerala People's Arts Club), which was a prominent leftist drama troupe in Kerala. She was given the screen name Lalitha and later when she joined movies, the tag K.P.A.C. was also added to her screenname to differentiate from another actress also named Lalitha, and she became K.P.A.C. Lalitha. She debuted cinema in the film version of her K.P.A.C. playKoottukudumbam directed by Thoppil Bhasi. She then went on to act in critically acclaimed films like Swayamvaram and Anubhavangal Palichakal. She acted as the heroine opposite superstar Prem Nazir in Chakravalam. She was also the female star in Kodiyettam(1977) opposite Bharath Gopi. In 1978 she married Bharathan, a noted Malayalam film director. She took a break from film acting for some years doing only a few films. The second phase of her career started with Kattathe Kilikkoodu(1983) directed by her husband Bharathan. In this phase she did many critically acclaimed roles including those in Sanmanassullavarkku Samadhanam (1986), Ponn Muttyidunna Tharavu (1988), Mukunthetta Sumitra Vilikkunnu (1988), Vadakkunokkiyantram (1989), Dasharatham (1989), Venkalam (1993), Godfather (1991),Amaram (1991), Vietnam Colony (1993), Sphadikam (1995), and Aniyathi Pravu (1997). She won the National Film Award for Best Supporting Actress for her performance in Amaram(1991), a film directed by her husband Bharathan. On 29 July 1998, she faced personal targedy whenBharathan passed away. She went into hibernation for a few months only to come back with a brilliant performance in Sathyan Anthikkaddirected Veendum Chila Veetukaryangal(1999). Her noted performances off late were in films Shantham (2000), Life Is Beautiful (2000),Alaipayuthey (2000) and Valkannadi (2002). She won her second National Film Award for Best Supporting Actress for her performance in Shantham(2000), directed by Jayaraj. She has acted in over 500 Malayalam films and 3 Tamil films[4]. She is still active in films and one of the most respected personalities in the Malayalam film industry.

Her son Sidharth debuted as an actor in Nammal, directed by Kamal. After a short career in acting he chose to go to his father's stream of work. He is currently the Assistant Director to Priyadarshan.

K.P.A.C. Lalitha is a national award winning Malayalam film and stage actress and the wife of famous Malayalam filmmaker Bharathan. She is a versatile actor known for her naturality in handling a wide range of characters and her comical timing. 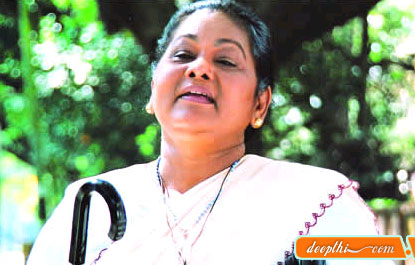