1SpaceCube
Ravi K Chandran is one of India's leading cinematographers.

Chandran, who is currently filming Sanjay Leela Bhansali's Black, shares his experience of working on Ratnam's new film -- he is part of both the Hindi and Tamil versions -- with Shobha Warrier. 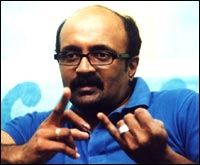 Mani Ratnam's new film [Yuva and Aayitha Ezhuthu] has three protagonists from three different stratas of society. I shot them differently. One is socially conscious, one very angry and violent and the third very self-centred.