Suresh Gopi born in (June 25,1960,Kollam,Kerala,India) is an National Film Award-winning actor in Malayalam cinema who is famous for his roles in police dramas. He is noted for his leading roles as much as he is for the character roles. He is also famous for his philanthropic efforts.
Suresh Gopi started his acting career in 1965 as a child artist in a malayalam movie 'Odayil Ninnum' which was a screen adaptation of the novel by the same name.He subsequently stopped acting and returned to Malayalam movies in the eighties. His first roles in the eighties were those of a supporting hero or the villain. His most notable works of this period include 'Irupatham Noottandu' (Twentieth Century), Rajavinte Makan ('The son of the King') a screen adaptation of 'The Rage Of Angels' by Sidney Sheldon and Oru Vadakkan Veeragatha.
His major break in a leading role came with "Thalasthanam" (The Capital) followed by Ekalavyan and Commissioner all of them Police dramas. He shot to superstardom with these movies and followed it up with roles in 'Pathram' (newspaper), 'Lelam' (Auction) and 'Vazhunnor' (The Rulers).

His portrayal of the police commissioner 'Bharath Chandran IPS' in Commissioner (1994) shot him to superstardom and is etched in Malayalam movie history as one of the most recognized roles. His famous monologue "Ormayundo ee mugkham?" ("Remember this face?") is synonymous with the role and has been subject to much imitation and parody. He is famous for his fervent delivery of English dialogues in the movies that he acts in. He became noted and was glorified for playing larger than life roles that were anti-establishment and often were a dig at the political and social corruption. In 1997 his acting prowess was proved as "Kannan Perumalayan" a role that he played in "Kaliyattam" (The play), a screen adaptation of "Othello" by William Shakespeare for which he got the National Award for best actor in the same year. Other noted hits were 'Pathram' (The Newspaper), Crime File, Kashmeeram, Janadhipathyam (Democracy),Sathyameva Jayathe, Thenkasipattanam, Highway, Summer in Bethlehem, Bharathchandran IPS, 'F.I.R' (First Information Report), Tiger and Chinthamani Kolacase
Before Love Cinema he was English literature field and his favourite pens are Bernard Shaw, Shakespeare, Camilla way etc etc. He is famous for his philanthropic efforts.He done many charity activities in Kerala, Tamilnadu, Gulf etc. Once he neglect the chance of stand for the election with Congress Party. His charity activties are spearheaded by his fans club which has a strength of about 800 members. 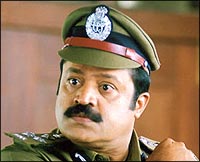