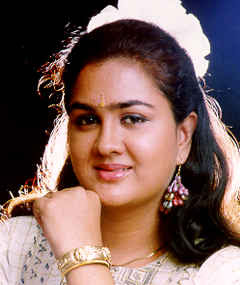 Urvashi is an Indian actress, who has appeared in a number of films in  Malayalam, Tamil, Teluguand Kannada. She is the sister of actresses Kalaranjini and Kalpana. She is one of the most loved heroines of the Malayalam film industry, playing some of the most unforgettable characters during the 1980s and 1990s.

She fell in love with popular actor Manoj K. Jayan and both married in 2000. On 11 October 2007 it was reported that actress Urvashi had obtained mutual separation from her husband. The couple developed difference of opinion and filed for divorce at a court in Chennai. Later, they got separated by a court order.

She started acting films during the 1980's. "Munthanai Mudichchu"(Tamil; 1983) directed by K. Bhagyaraj fanderirst film. "Ethirppukal" (Malayalam; 1984) was one of her earlier films in Malayalam. During the peak of her career, she starred in M. P. Sukumaran Nair's award-winning film 'Kazhakam' in 1995, without taking a single penny as remuneration. She was awarded Best Actress for this role.

She made her debut in Tamil films with Mundhanai Mudichu (1983) with Bhagyaraj. The movie was a big hit and made Urvashi a sought after actress in all the South Indian languages. Urvashi has also acted in many Kannada movies with all top heroes like Rajkumar, Vishnuvardhan,Ravichandran and Ramesh Aravind. Her latest Kannada movie Rama Shama Bhama (2005) with Ramesh Arvind and Kamal Haasan was a crowd puller and her performance was well appreciated by critics and audience.