Muslim, Indian, and Western historians all see Akbar as the greatest ruler of Indian history. When his father, Humayun, died in 1556, Akbar became padshah ("ruler of the empire") at the age of thirteen. Under the guidance of Bairam Khan, who had been instrumental in Humayun's reconquests of Panipat, Dehli, and Agra, Akbar instantly began seizing more territory throughout Hindustan. Bairam Khan fell from power in 1560, but Akbar continued his conquest of India and Afghanistan. By the time he died in 1605 (his reign, 1556 to 1605, corresponds almost exactly to that of Elizabeth I of England), his Empire was greater than that of Babur and included almost all of northern India.

In order to govern this territory, Akbar developed a bureaucracy and a system of autonomy for the imperial provinces. Akbar's bureaucracy was among the most efficient in the world. He put military governors, or mansabars , in charge of each region. Each governor was responsible for the provincial military and, as in the Ottoman state, was directly responsible for all abuses. Abuses of power and mistreatment of the poor or weak resulted in severe punishments and death, just as in the Ottoman Empire. Each military governor was put in charge by the padshah himself, so he could be dismissed at will.

The most important part of the bureaucracy was tax collection. Akbar made several innovations. His tax, like all other states, was a land tax that amounted to one-third of the value of the crops produced on it each year. However, the tax was assessed equally on every member of the empire-a radical innovation considering that every other state in the sixteenth century rarely taxed the nobility. He also eliminated the tax assessed on non-Muslims. From the beginning of the Islamic expansion, a special tax was levied on non-believers. This special tax, called the jizya , was bitterly resented all during the history of Muslim rule in India. In addition, Muslim rulers in India charged a "pilgrimage" tax on unbelievers travelling to various Hindu pilgrimage sites. Akbar eliminated this tax in 1564.

A large part of Akbar's administrative efforts were winning over Hindu populations. The Rajput kingdoms had never fully accepted Islamic rule, but the revocation of the jizyat and the pilgrimage taxes helped to calm their restiveness. Akbar also included vast number of Hindus in the official bureaucracy; by his death, almost one-third of the imperial bureaucracy were Hindu. He cemented relations with the various kingdoms by marrying the daughters of the kings. By the end of this process he had over five thousand wives, almost all of whom he married for political reasons. His favorite wife, however, was a Hindu, and she gave birth to his successor, Jahangir. His most successful administrative coup, however, was allowing Hindu territories to retain a large degree of autonomy. In all other Muslim kingdoms, non-Muslims came under the same law, the Shari'a , as all Muslims. Akbar, however, allowed the Hindus to remain under their own law, called the Dharmashastra , and to retain their own courts. This loose style of government, in which territories were under the control of the Emperor but still largely independent, became the model that the British would emulate as they slowly built the colonial model of government in the eighteenth and nineteenth centuries.

The Political Theory of Akbar's State

There was considerable disagreement all during the reigns of Babur, Humayun, and Akbar over the nature of monarchy and its place in Islamic society. Many Islamic scholars under Babur and Akbar believed that the Indian monarchies were fundamentally un-Islamic. At the heart of the problem was the fact that none of the invading monarchs were approved by the Caliph, but rather were acting solely on their own. The majority of Islamic scholars, however, concluded that the monarch was divinely appointed by God to serve humanity and that the Indian sultanate or the Mughal padshah was acting in the place of the Caliph.

The political theorists and Islamic scholars surrounding Akbar were deeply influenced by Shi'a Islam. In particular, they subscribed to the Shi'a notion that God had created a Divine Light that is passed down in an individual from generation to generation; this individual is known as the Imam. The central theorist of Akbar's reign was Abu'l Faz'l, who joined Akbar's court in 1574 and is considered one of the greatest political theorists in Islamic history. He believed that the Imamate existed in the world in the form of just rulers. The Imam, in the form of a just ruler, had secret knowledge of God, was free from sin, and was primarily responsible for the spiritual guidance of humanity. This, to a certain extent, made the padshah superior to the Shari'a , or Islamic law, and the Islamic scholars that interpreted it. Needless to say, orthodox Islamic scholars bitterly opposed this political theory, but instead advocated a close partnership between the ulama , or Islamic religious and legal scholars, and the Sultan or padshah .

Abu'l Fazl was also deeply influenced by Platonic philosophy as it had been handed down by Muslim philosophers. In particular, he argued for Plato's concept of the "philosopher-king," who, by virtue of his talent, wisdom, and learning, deserved to be obeyed by all others. He saw Akbar as the embodiment of the perfect philosopher-king.

From a religious standpoint, Akbar's state was built on the principle sulahkul , or "universal tolerance." All religons were to be equally tolerated in the administration of the state; hence the repeal of the jizya and the pilgrimage taxes. In Akbar's theory of government, the ruler's duty is to ensure justice ('adale ) for all the people in his care no matter what their religion.

Akbar took very seriously Abu'l Fazl's idea that he was a spiritual leader of his people and he devoted considerable amounts of time and resources to sorting out the common truth in the multiple religions he ruled over. From this concern he developed a new religion he called Din-i Ilahi , or "The Religion of God." Believing, as Muslims do, that every faith contained the essential truth that God is unified and one thing, he sought to find the unifying aspects of all religions. He originally began this project, long before he came up with Din-i Ilahi , by sponsoring a series of debates at his court between representatives of the various religions, which included Christianity (Catholic Jesuits), Hindus, Zoroastrians, and Jains. Eventually he included members of the ulama , but the debates did not go well because of the intolerant attitude and behaviors of the Jesuit participants who wanted to convert Akbar, not discuss the formation of a universal religion.

Akbar was a devout and, so he said, an orthodox Muslim; still, aspects of his belief were in part derived from Shi'a Islam. The Din-i Ilahi , the religion that would synthesize the world's religions into a single religion, that he established was predominantly based on Islam. Like Islam, it was rationalistic and was based on one overriding doctrine, the doctrine of tawhid : God is one thing and is singular and unified. Akbar also elevated the notion of wahdat-al wujud , or "unity of the real," to a central religious idea in his new religion. The world, as a creation of God, is a single and unified place that reflects the singularity and unity of its creator. Finally, Akbar fully subscribed to the Islamic idea of the Perfect Man represented by the life of the Prophet or by the Shi'ite Imamate. There is little question that Akbar accepted Abu'l Fazl's notion that he was the Divine Light and was a Perfect Man. He assumed the title, "Revealer of the Internal and Depictor of the Real," which defined his role as a disseminator of secret knowledge of God and his function of fashioning the world in the light of this knowledge.

In addition to Islam, however, the Din-i Ilahi also contained aspects of Jainism, Zoroastrianism, and Hinduism. The Din-i Ilahi borrowed from Jainism a respect and care for all living things, and it derived from Zoroastrianism sun-worship and, especially, the idea of divine kingship. This latter innovation deeply disturbed the ulama ; they regarded it as outright heresy. The notion of divine kingship, however, would last throughout the history of the Mughal Empire.

Akbar's closest and most beloved religious advisor was an Islamic Sufi mystic, Shayk Salim Chishti. After years of having no son and heir, the birth of Jahangir seemed to fulfill one of Salim Chishti's prophecies. In gratitude to his former religious advisor and to Allah, Akbar set about building what he theorized as the "perfect city," one that would represent the power of his empire, the meaning of God's message to humanity, and would ensure perfect harmony. Above all, the city would represent Islam. He completed his new city, Fatehpur Sikri, in 1578. The city contains a mosque, a palace, a lavish and huge garden, a worship hall for Din-i Ilahi , and, finally, a tomb for Shaykh Salim Chishti in the great mosque itself. The city served for a while as Akbar's capital and lavish court. It was, however, placed far from source of water and the "perfect city" and "perfect symbol of Islam" was abandoned forever shortly after Akbar's death. 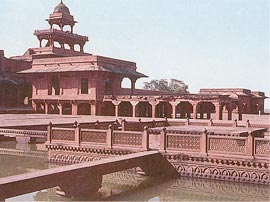