The Chinese fishing nets (Cheena vala) of Fort Kochi (Fort Cochin) in the City of Kochi (Cochin), in the Indian State of Kerala, are fixed land installations for an unusual form of fishing - shore operated lift nets.[1] Huge mechanical contrivances hold out horizontal nets of 20 m or more across. Each structure is at least 10 m high and comprises a cantilever with an outstretched net suspended over the sea and large stones suspended from ropes as counterweights at the other end. Each installation is operated by a team of up to six fishermen.

The system is sufficiently balanced that the weight of a man walking along the main beam is sufficient to cause the net to descend into the sea. The net is left for a short time, possibly just a few minutes, before it is raised by pulling on ropes. The catch is usually modest: a few fish and crustaceans - these may be sold to passers by within minutes. The system of counterweights is most ingenious. Rocks, each 30 cm or so in diameter are suspended from ropes of different lengths. As the net is raised, some of the rocks one-by-one come to rest on a platform thereby keeping everything in balance. Each installation has a limited operating depth. Consequently, an individual net cannot be continually operated in tidal waters. Different installations will be operated depending on the state of the tide.

It is received wisdom that the nets are Chinese in origin. This is not as improbable as the 5,000 km distance from China might suggest - Kochi is a very important centre for the spice trade attracting traders from far and wide. Some suppose that the nets were introduced by the Chinese explorer Zheng He. The Chinese fishing nets have become a very popular tourist attraction, their size and elegant construction is very photogenic and the slow rhythm of their operation is quite hypnotic. 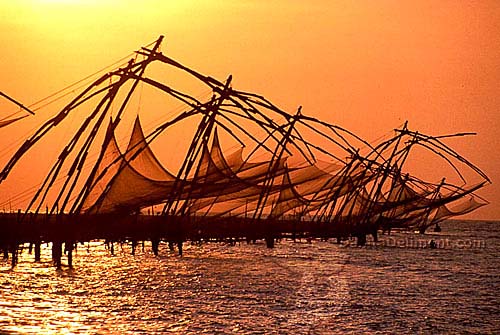