In astrophysics and cosmology, dark matter refers to hypothetical matter of unknown composition that does not emit or reflect enough electromagnetic radiation to be observed directly, but whose presence can be inferred from gravitational effects on visible matter. According to present observations of structures larger than galaxy-sized as well as Big Bang cosmology, dark matter accounts for the vast majority of mass in the observable universe. Fritz Zwicky used it for the first time to declare the observed phenomena consistent with dark matter observations as the rotational speeds of galaxies and orbital velocities of galaxies in clusters, gravitational lensing of background objects by galaxy clusters such as the Bullet cluster, and the temperature distribution of hot gas in galaxies and clusters of galaxies. Dark matter also plays a central role in structure formation and galaxy evolution, and has measurable effects on the anisotropy of the cosmic microwave background. All these lines of evidence suggest that galaxies, clusters of galaxies, and the universe as a whole contain far more matter than that which interacts with electromagnetic radiation: the remainder is called the "dark matter component". The composition of dark matter is unknown, but may include ordinary and heavy neutrinos, recently postulated elementary particles such as WIMPs and axions, astronomical bodies such as dwarf stars and planets (collectively called MACHOs), and clouds of nonluminous gas. Current evidence favors models in which the primary component of dark matter is new elementary particles, collectively called non-baryonic dark matter.

The dark matter component has vastly more mass than the "visible" component of the universe. At present, the density of ordinary baryons and radiation in the universe is estimated to be equivalent to about one hydrogen atom per cubic metre of space. Only about 4% of the total energy density in the universe (as inferred from gravitational effects) can be seen directly. About 22% is thought to be composed of dark matter. The remaining 74% is thought to consist of dark energy, an even stranger component, distributed diffusely in space. Some hard-to-detect baryonic matter makes a contribution to dark matter, but constitutes only a small portion. Determining the nature of this missing mass is one of the most important problems in modern cosmology and particle physics. It has been noted that the names "dark matter" and "dark energy" serve mainly as expressions of our ignorance, much as the marking of early maps with "terra incognita"

Astronomers using the Hubble space telescope have discovered a bizarre ring of dark matter, one of the most mysterious substances in the universe. 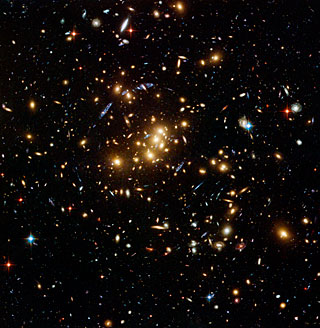