Thiruvananthapuram's most interesting temple is dedicated to Lord Vishnu. The temple is a blend of the Kerala and Dravidian style of architecture. It is a best example of South Indian architecture, with an impressive seven -story gopuram (tower).A flagstaff encased in gold stands in the huge courtyard.It is known for its murals and carvings. In the main courtyard, the Kulashekara mandapam, there is some intricate granite sculpture and nearly 400 pillars are supporting the temple corridors. Only Hindus are allowed inside the temple and they have rules of clothing. Even the male Hindus, must enter the temple wearing only white dhoti.

The daily services in the temple consist of prayers and offerings three times a day (Trikala puja). The morning puja begins at about 4 a.m., the forenoon puja at 11 a.m., and the evening puja at 6 p.m. The idol is decorated with jewels, sandal paste and flowers. The inner shrine is very well lighted and devotees stream in hundreds for the puja when a plate of burning camphor is waved in front of the God to the accompaniment of 'manthras', music of pipe and ringing of innumerable bells. Worshippers perambulate the innermost enclosure and sing verses in praise of the diety. The 'Tirtham' is after 'Abhisheka' and flowers are distributed to the devotees. The 'Neivedyam' offering to the deity consists of fried rice, sweetened beaten rice, aravannai (rice, ghee and sugar boiled together), appam (sweet cake), honey, plantains and betel leaves.

Every day, both in the evening and at night, the idols of the Gods are taken in procession around the Siveli Mandapam with display of various musical instruments, silver and gold umbrellas, elephants, horse and bull. This procession is known as 'Siveli'. At night, the procession is very picturesque because there is the additional attraction of the temple being illuminated with torches and cloth wicks in the notches of the walls of which there are thousands of these. The Maharaja walks in front, before the procession in temple costumes. Many prominent Hindu officials take part in this procession.

The Padmanabha Swamy temple is a treasure house of ancient works of art, such as sculpture in stone and bronze, mural paintings and wood carvings. The mural paintings which represent incidents from the Puranas are remarkable for their lustre, colour and antique dignity. Precious yelics of a 14th century painting belonging to the reign of Aditya Varma Sarvanganatha, a king of Travancore, are found in the temple. Many others have been copied and exhibited in the Chitralayam Art Gallery, together with wonderful examples of Tibetan, Chinese and Japanese paintings.

Numerous devotees come from far and near to take part in the two festivals, conducted annually at the temple, one of them during Thula month (October)and the other in the Meenam Month (March). The Maharaja of Travancore himself, leads the procession twice daily during the ten-day celebrations. The celebrations conclude with 'Palli Vettai' (symbolic of a wild animal hunt) on the ninth day and the 'Arat' (holy bath at the Sankumugham beach, two miles from the temple) on the tenth day. An attraction of the Meenam Uthsavam is the 'Velakali' which depicts the Kurukshetra war between the Pandavas and the Kauravas. Besides these, there are the 'Bhadradipams' of seven day duration celebrated twice a year. At the end of twelve such Bhadradipams, that is every sixth year, there is a major celebration called the 'Murajapam' (chanting of Manthras}. The Travancore of Maharaja, Marthanda Varma, had conducted many wars against petty principalities, which were scattered. The first such Murajapam was held in 1750 A.D., to expiate the sins of war and annexation of territory. The 'Laksha Deepam' (festival of lights) around the temple, marks the conclusion of the celebrations.

Quite a few gorgeous processional 'vahanas' in the temple were designed and dedicated by Maharaja Swati Tirunal. The entire codification of the details of rituals and ceremonies observed in the temple and during the nine days festival of Navarathri, reveal his touch. Raja Swati Tirunal, the great composer, whose 150th birthday was celebrated all over India in 1965, has composed many songs in praise of Padmanabha. An exquisite piece of stone work is the Kulasekhara Mandapam (Ayirankal Mandapam). Padmanabha Swamy temple is the only major specimen of the Dravidian style of architecture to be found not only in Tiruvananthapuram district, but the whole of Kerala State. The entrance tower of the temple is a fine example of South Indian architecture. It is about 35 metres in height and has seven storeys. The foundation of the present tower was laid in 1566 A.D., and the structure was completed in 1604 A.D. The flag post (Dhwaja stambha) in front of the temple was erected in 1565 A.D. Later, it was covered with gold plated copper sheets.

The 'Bali Peetha Mandapam' and 'Mukha Mandapam' with excellent sculptures of several deities in the Hindu pantheon and the 'Navagraha Mandapa', the ceiling of..which displays nine planets in front of the Krishna shrine are other notable parts of the temple. The Siveti Mandapam, the tower and the outer pathways bear the imprint of master sculptors. An example of their fine craftsmanship is seen in a piece of carving which has the figure of an elephant on one side and that of a bull on the other. Their forms are so expertly blended that the horns of the bull appear as the tusks of the elephant when viewed from the other side and the rolledup trunk of the elephant serves as the hump for the bull. 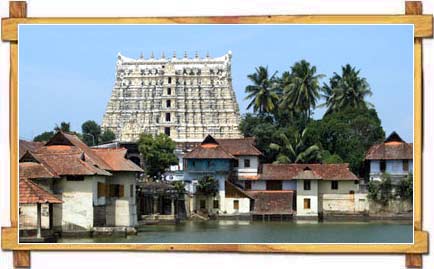