Point Calimere, also called Cape Calimere and Kodikkarai, is a low headland on the Coromandel Coast, in Nagapattinam district, in the state of Tamil Nadu, India. It is the apex of the Cauvery River delta, and marks a nearly right-angle turn in the coastline. A historic landmark here was the Chola lighthouse, however this was destroyed in the tsunami of 2004. There is a Wildlife and Bird Sanctuary here, which includes the cape and its three natural habitat types: dry evergreen forests, Mangrove forests, and wetlands. The forests of Point Calimere, also known the Vedaranyam forests, are one of the last refuges of the dry evergreen forests that were once typical of the East Deccan dry evergreen forests ecoregion. The Point Calimere Wildlife Sanctuary was created on June 13, 1967 to protect the forests, with an area of 24.17 km². In 1988, the sanctuary was enlarged to include the Great Vedaranyam Swamp and the Talaignayar Reserve Forest, and renamed the Point Calimere Wildlife and Bird Sanctuary, with a total area of 377 km².

The area is dotted with Salt pans. Not far from Point Calimere is the mangrove forest of Muthupet. Point Calimere is also associated with the Hindu epic Ramayana. The highest point of the cape, at an elevation of 4 m, is Ramarpatham, meaning, "Rama's feet" in Tamil. A stone slab which bears the impressions of two feet, and is presumed to be the place where Lord Rama stood and reconnoitered Ravana's kingdom in Sri Lanka, which lies 48 km. to the south. 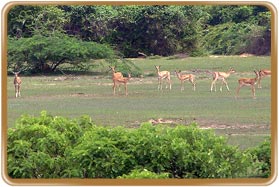