Pratibha Patil (born December 19, 1934) is the 13th and current President of India. She is the first woman and first Maharashtrian to hold this post. She was sworn in as President of India on July 25, 2007 by the Chief Justice of India K. G. Balakrishnan. She succeeded Dr. A.P.J. Abdul Kalam. Patil, a member of the Indian National Congress (INC), was nominated by the ruling United Progressive Alliance and Indian Left. She won the presidential election held on July 19, 2007 defeating her nearest rival Bhairon Singh Shekhawat by over 300,000 votes

A trained lawyer, Patil represented Edlabad constituency in Jalgaon District, Maharashtra as a member of the Maharashtra Legislative Assembly (1962-1985), and was deputy chairwoman of the Rajya Sabha (1986-1988), Member of Parliament from Amravati in the Lok Sabha (1991-1996), and the 24th, and the first woman Governor of Rajasthan (2004-2007). 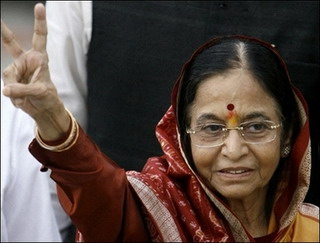