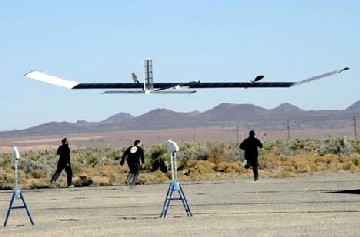 A solar-powered aircraft has broken the world record for longest unmanned flight, sailing for 54 hours more than 50,000 feet (15,240 meters) above the New Mexico desert, QinetiQ, the plane's manufacturer, claimed. QinetiQ's ultra-thin "Zephyr" plane nearly doubled the current record, which stood at 30 hours, 24 minutes in a flight on July 23, 2007, the company said in a statement. But the company acknowledged the record might not stand because the test, held at the White Sands Missile Range in New Mexico, was not witnessed by officials from the World Air Sports Federation, which keeps and certifies records.

Built from carbon fibers, the aircraft has a 59-foot wingspan and weighs about 66 pounds light enough to be launched, by hand, by a team of three. It uses paper-thin silicon panels to draw on the sun's power and stores the surplus in lithium-sulphur batteries, which power it through the night. Zephyr could be used for surveillance and communications