Surya Kiran (literally meaning, Sun Rays), is an aerobatics demonstration team of the Indian Air Force, successors to the Thunderbolts. The squadron is primarily composed of the indigenously manufactured fighter, the Kiran Mk II, and they're based at the Bidar Air Force Station in Karnataka. The Indian Air Force has placed an order for 16 HJT-36 that will replace the Kiran MK II. 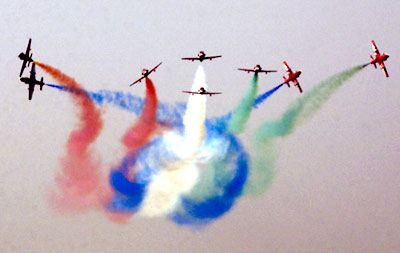