Access to the test facility is by ship as there is no bridge or airport connecting the island to the mainland. There is a small helipad, but missile airframes and all supplies, construction materials and heavy equipment arrives by ship. The test facility consists of a launch pad, missile assembly/checkout buildings, and several administrative, and support buildings. Missile airframes are transported from the pier to the launch pad by a 2.3 kilometer long rail line, that connects the missile assembly buildings. Seven new buildings have been indentified since May 31, 2000 including three probably missile assembly/support buildings, and a probable headquarters or administration building. A possible AGNI II missile airframe is visible in the most recent Ikonos imagery dating October 27, 2001. Several structures including the launch pad, the helipad, and some of the support buildings have been painted in a vein attempt at camaflage. Detection of the missile test facility is possible at 15-meter GSD. A 1-meter GSD, the paint pattern only draws attention to structures the Indians are attempting to hide 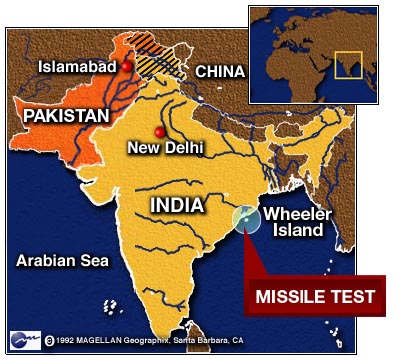