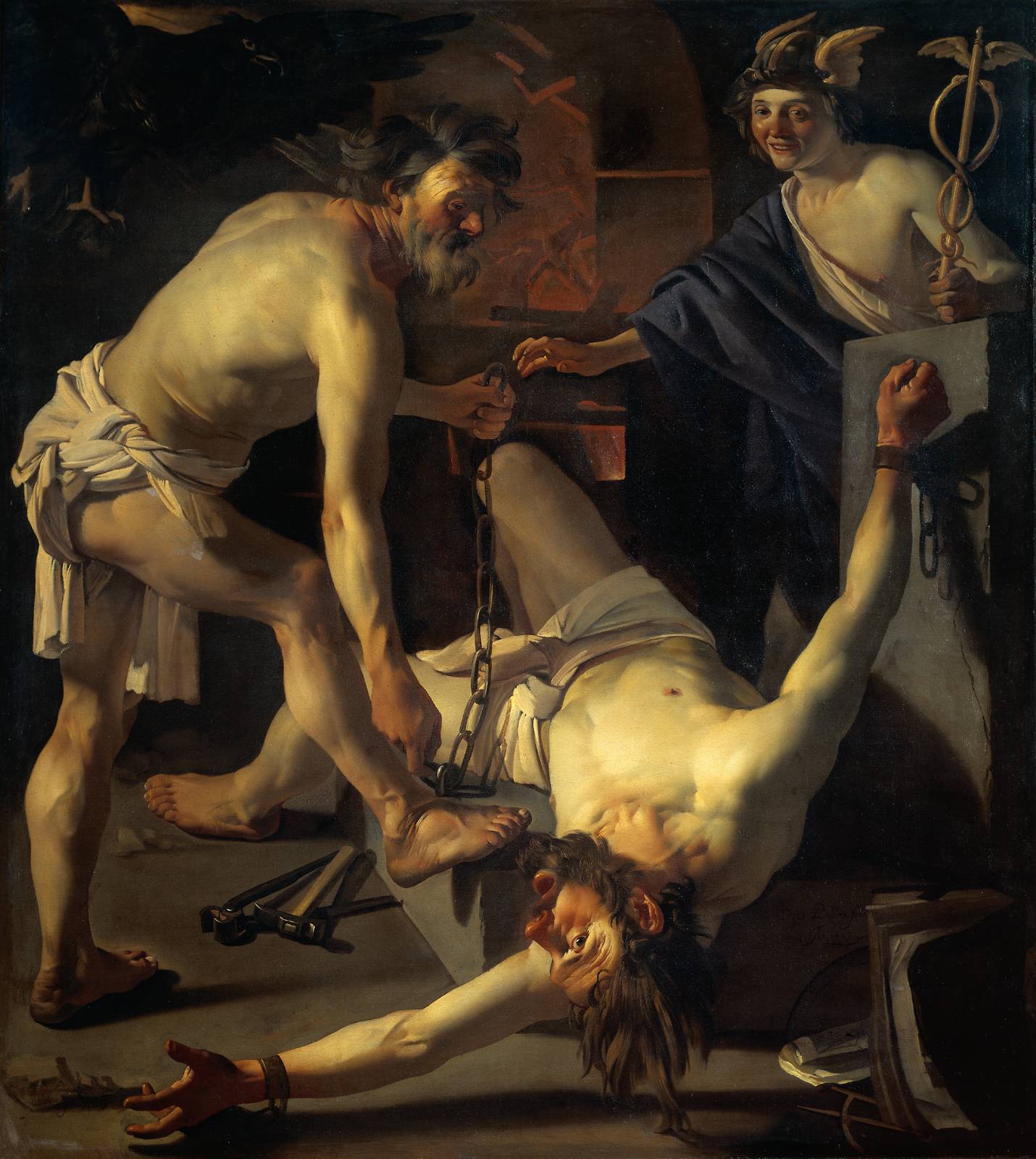 1SpaceCube
In Greek mythology, Prometheus (in Greek, Προμηθεύς — "forethought") is the Titan chiefly honored for stealing fire from Zeus in the stalk of a fennel plant and giving it to mortals for their use. For that, Zeus ordered him to be chained on top of the Caucasus. Every day an eagle would come and eat his liver, but since Prometheus was immortal, his liver always grew back, so he was left to bear the pain everyday. He is depicted as an intelligent and cunning figure who had sympathy for humanity. To this day, the term promethean refers to events or people of great creativity, intellect and boldness.
4SpaceCube
The myth

Prometheus was a son of Iapetus by Clymene (one of the Oceanids). He was a brother of Atlas, Menoetius and Epimetheus, but he surpassed all in cunning and deceit. He held no awe for the gods, and he ridiculed Zeus, although he was favored by him for assisting him in his fight against Cronus.

Prometheus, in Ovid's Metamorphoses, is credited with the creation of man "in godlike image" from clay (in others, this role is assigned to Zeus). When he and his brother Epimetheus set out to make creatures to populate the earth under the orders of Cronus, Prometheus carefully crafted a creature after the shape of the gods: a man. According to the myths, a horrendous headache overcame Zeus and no healer of the realm was able to help the Lord of the Gods. Prometheus came to him and declared that he knew how to heal Zeus. Taking a rock from the ground, Prometheus proceeded to hit Zeus in the head with it. From out of Zeus' head popped the Goddess Athena; with her emergence Zeus' headache disappeared. Some myths attribute Hephaestus or Hera to the splitting of the head rather than Prometheus.

Zeus was angered by the brothers' actions; he forbade the pair from teaching Man the ways of civilization. Athena chose to cross Zeus and taught Prometheus so that he might teach Man.

For their actions, Zeus demanded a sacrifice from Man to the Gods to show that they were obedient and worshipful. The gods and mortal man had arranged a meeting at Mecone where the matter of division of sacrifice was to be settled. Prometheus slew a large ox, and divided it into two piles. In one pile he put all the meat and most of the fat, skillfully covering it with the ox's grotesque stomach, while in the other pile, he dressed up the bones artfully with shining fat. Prometheus then invited Zeus to choose. Zeus, seeing through the trick, realized that in purposefully getting tricked he would have an excuse to vent his anger on mortal man, and thus chose the pile of bones (many sources say that Zeus did not, in fact, see through this trick). This also gives a mythological explanation of the practice of sacrificing only the bones to the gods, while man gets to keep the meat and fat.

Zeus in his wrath denied men the secret of fire. Prometheus felt sorry for his creations, and watched as they shivered in the cold and winter's nights. He decided to give his most loved creation a great gift that was a "good servant and bad master". He took fire from the hearth of the gods by stealth and brought it to men in a hollow wand of fennel, or ferule that served him instead of a staff. He brought down the fire coal and gave it to man. He then showed them how to cook and stay warm. To punish Prometheus for this hubris (and all of mankind in the process), Zeus devised "such evil for them that they shall desire death rather than life, and Prometheus shall see their misery and be powerless to succor them. That shall be his keenest pang among the torments I will heap upon him." Zeus could not just take fire back, because a god or goddess could not take away what the other had given.

Zeus was enraged because the giving of fire began an era of enlightment for Man, and had Prometheus carried to Mount Caucasus, where an eagle (often mistaken as a vulture) by the name of Ethon (offspring of the monsters Typhon and Echidna) would pick at his liver; it would grow back each day and the eagle would eat it again. Curiously, the liver is one of the rare human organs to regenerate itself spontaneously in the case of lesion. The ancient Greeks were well aware of this, since they named liver (Greek: hēpar, ήπαρ[1]) after hēpaomai (ηπάομαι[2]), hence hēpar actually means "repairable".

In some stories, Zeus has Prometheus tortured on the mountain because he knows the name of the person who, according to prophecy, will overthrow the king of the gods. This punishment was to last 30,000 years. About 12 generations later, Heracles (known as Hercules in Roman mythology), passing by on his way to find the apples of the Hesperides as part of the Twelve Labours, freed Prometheus. Once free, Prometheus captured the eagle and ate his liver as revenge for his pain and suffering. Zeus did not mind this time that Prometheus had again evaded his punishment, as the act brought more glory to Heracles, who was Zeus's son. However, there was a problem. Zeus had made the decision that Prometheus would be tied in the rock for eternity. According to Greek mythology, this could never change, even if Zeus himself wished it. Finally, a solution was found. Prometheus was invited to return to Olympus and was given a ring by Zeus which contained a piece of the rock to which Prometheus had been bound. Prometheus liked this ring and decided to wear it thereafter for eternity. According to some myths, Hercules was told by Zeus to tell Prometheus the solution.

To punish man for the offenses of Prometheus, Zeus told Hephaestus to "mingle together all things loveliest, sweetest, and best, but look that you also mingle therewith the opposites of each." So Hephaestus took gold and dross, wax and flint, pure snow and mud of the highways, honey and gall; he took the bloom of the rose and the toad's venom, the voice of laughing water and the peacocks squall; he took the sea's beauty and its treachery, the dog's fidelity and the wind's inconstancy, and the mother bird's heart of love and the cruelty of the tiger. All these, and other contraries past number, he blended cunningly into one substance and this he molded into the shape that Zeus had described to him. She was as beautiful as a goddess and Zeus named her Pandora which meant "all gifted".

Zeus breathed upon her image, and it lived. Zeus sent her to wed Prometheus' brother, Epimetheus, and although Prometheus had warned his brother never to accept gifts from the Olympians, Epimetheus was love-stricken, and he and Pandora wed. The Gods adorned the couple with many wedding gifts, and Zeus presented them with a beautifully wrought box. When Pandora opened the box, all suffering and despair was unleashed upon mankind. Zeus had had his revenge.

((Pandora, in other stories, was said to be the root of evil, knowing what was in the box when Zeus gave it to her, and opened it anyway. In some stories, she was simply a woman with an insatiable amount of curiosity. Zeus gave her the box, told her not to open it, but curiosity got the better of her, and she opened it anyway, releasing evils upon the world. In almost all Pandora stories, someone //she or Epimetheus// manages to close the box before everything escaped, but in their mourning over what had happened to the world, did not remember to lock the lid, and the last of what was in the box came out. At the bottom of the box, placed there by one of the other goddesses //Either Athena or Hera// was hope. Hope for humanity to hold to when the worst has come to pass. ))

As the introducer of fire and inventor of crafts, Prometheus was seen as the patron of human civilization. Uncertain sources claim he was worshiped in ancient Rome as well, along with other gods.

He was the father of Deucalion with Pronoia who is often confused as Clymene because the both of them are often called by the same other name, Asia.

Prometheus had a small shrine in the Kerameikos, or potter's quarter, of Athens, not far from Plato's Academy.

"In the Akademia [outside Athens] is an altar to Prometheus, and from it they run to the city carrying burning torches. The contest is while running to keep the torch still alight; if the torch of the first runner goes out, he has no longer any claim to victory, but the second runner has. If his torch also goes out, then the third man is the victor. If all the torches go out, no one is left to be the winner."

The Argives possessed a tomb of Prometheus,who honoured him as a dead hero.

"As to the tomb of Prometheus, their account seems to me to be less probable than that of the Opuntians [who also claimed a grave] , but they hold to it nevertheless." [1]

The cloned horse Prometea, and Prometheus, a moon of Saturn, are named after this Titan, as is the asteroid 1809 Prometheus. The story of Prometheus has inspired many authors through the ages, and the Romantics saw Prometheus as a prototype of the natural daemon or genius. Promethius is a mythical analogue of Lucifer.

Sculpture of Prometheus in front of the GE Building at the Rockefeller Center (New York City, New York, USA).