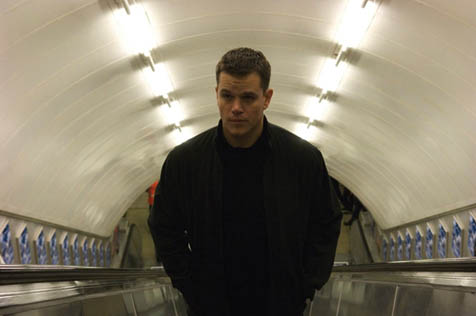 The Bourne Ultimatum is a 2007 film loosely based on the Robert Ludlum novel of the same name. A sequel to The Bourne Supremacy and the third film of the Bourne Trilogy, it stars Matt Damon reprising his role as Ludlum's signature character, amnesiac CIA assassin Jason Bourne. Julia Stiles, David Strathairn, Scott Glenn, Paddy Considine, Edgar Ramirez, Albert Finney, and Joan Allen co-star. The key cast members reprise their roles from the two previous Bourne movies, with additions such as Strathairn, playing a CIA department head; Paddy Considine as a British journalist; and Edgar Ramirez as a new assassin sent to kill Bourne. The film continues the saga of Jason Bourne after he survives the harrowing Bourne Supremacy car chase in Moscow, Russia, and follows the character as he travels to Paris, London, Madrid, Tangier and New York City to uncover his real identity, while the CIA continues to send assassins after him. Paul Greengrass directed the film from a script by Tony Gilroy, Scott Z. Burns, George Nolfi and an uncredited Tom Stoppard.[citation needed] The producers were Patrick Crowley, Frank Marshall, Paul L. Sandberg and Doug Liman, who directed the first Bourne movie, The Bourne Identity. The Bourne Ultimatum was produced by Universal Pictures and was released on August 3, 2007 in North America, where it grossed $69.2 million in ticket sales in its first weekend of release, making it the highest August opening.[1] By the end of August 2007, the film was said to be on track to exceed the international box office gross of the first two films in the trilogy.[2] The movie begins immediately following the car chase near the end of The Bourne Supremacy, with a wounded Jason Bourne (Matt Damon) evading the Moscow police. Cornered by police while breaking into a medical clinic to treat his wounds, Bourne overcomes the police officers and leaves them alive as he escapes. The story continues six weeks later when Bourne goes to Paris to tell Marie's brother Martin (Daniel Brühl) of her death. On the way, Bourne reads an article in The Guardian where journalist Simon Ross (Paddy Considine) describes Jason Bourne as a CIA operative. Bourne arranges to meet Ross in London at Waterloo station. However, Ross is under CIA surveillance, after his use of the word "Blackbriar" in a phone call to his editor, alerted the CIA via ECHELON. After receiving a phone call from Bourne, Ross drives to Waterloo Station and is followed by the CIA, believing him to be meeting his source there. At the station, Bourne sees CIA agents following Ross and places a prepaid mobile phone on Ross and calls him, instructing Ross how to evade the agents while Bourne knocks out others tailing Ross. However, CIA official Noah Vosen (David Strathairn), who heads Operation Blackbriar (a renamed Treadstone proposed by Ward Abbott at the end of The Bourne Identity), orders an assassin named Paz (Edgar Ramirez) to kill Ross and his source. Vosen's team identifies Bourne on a security camera, and recognize him as a Treadstone assassin, and assumes he must be Ross's source. Bourne advises Ross to remain hidden, but Ross panics and reveals himself, giving Paz a clear killing shot. In the ensuing chaos, Bourne steals Ross's notes from his body, revealing Ross's source as Neal Daniels (Colin Stinton), the CIA's Madrid station chief. Deputy Director Pamela Landy (Joan Allen) is asked to help capture Bourne. With Landy's help, Vosen and his team realize that Daniels is Ross's source. They decide to send a team to Daniels's office, but Bourne arrives first, attacking the CIA team while they secure the office. While Bourne finishes his attack, Nicky Parsons (Julia Stiles) enters the office. Nicky tells him that Daniels fled to Tangier and helps him to escape the CIA reinforcements by telling Vosen that Bourne had already left the office. Bourne calls the police with a hint of gunfighting. The police arrive exactly when the second CIA team arrives at the office. When Bourne asks Nicky why she is helping him, Nicky only hints vaguely at something before Bourne's amnesia. While in Tangier, they realize the CIA has sent assassin Desh Bouksani (Joey Ansah) for Daniels. Nicky uses her official clearance access to send Desh a message, telling him to meet her for a new phone. This allows Bourne to follow Desh to his target. When Vosen realizes Nicky's deceit he orders Desh to kill Nicky and Bourne after terminating Daniels. Landy is outraged at Vosen's willingness to indiscriminately kill CIA personnel and quits the operation. Jason Bourne about to confront Desh in TangierBourne follows Desh and accidentally places Daniels in danger, who dies from Desh's planted bomb. When Desh returns for Nicky, Bourne has to outrun the Tangier police and fights Desh, eventually strangling him with a towel. At the Tangier morgue, Bourne examines Daniels' charred papers and finds the address of the CIA substation in New York City. Before Bourne journeys to the U.S., Bourne makes Nicky go into hiding. In New York City, Bourne calls Landy while observing her and Vosen from across the street. The ending of The Bourne Supremacy is repeated: Landy tells him his real name is David Webb and that he was born on "4/15/71", a code for the address of the Treadstone facility at 415 East 71st Street. Bourne sends a text message to Landy to arrange a meeting. Vosen and his team intercept the message and follow Landy as she leaves the building. Bourne's meeting is later found to be a diversion, allowing Bourne to enter Vosen's office and steal classified Blackbriar documents. Vosen realizes the diversion after a phone call from Bourne, who states he is in Vosen's office, and orders CIA agents back to his office to capture Bourne. Bourne escapes and enters into a car chase with CIA agents and Paz, whom Bourne chooses not to kill after they crash. Just outside the facility, Bourne meets Landy and gives her the stolen documents from Vosen's office before entering the building. Inside, he meets Dr. Albert Hirsch (Albert Finney), who ran Treadstone's psychological conditioning. With his help, Bourne remembers that as David Webb, he volunteered for the program. However, he tells Hirsch he no longer wants to be Bourne or have anything to do with Treadstone or the CIA, and walks away. Back at the substation, Vosen's team realizes Landy gave Bourne an address in code when Landy told Bourne of his date of birth. Vosen races to the facility and confronts Landy as she finishes faxing away his documents Bourne stole. Meanwhile, Bourne is cornered on the facility's rooftop by Paz. Paz holds Bourne at gunpoint and demands to know why Bourne spared his life. Bourne asks if Paz knows why he was ordered to kill Bourne. "Look at what they make you give," says Bourne, repeating the dying words of the Treadstone assassin called The Professor from The Bourne Identity. Paz lowers his weapon, but Vosen appears and fires on Bourne as he jumps from the roof, falling into the river below. A few days later, Nicky is in hiding, watching a news report: Blackbriar is exposed, Hirsch and Vosen are arrested, CIA Director Ezra Kramer (Scott Glenn) is the subject of a Senate hearing regarding his conduct, and David Webb, a.k.a. Jason Bourne, fell into the East River, but his body was not recovered, at which Nicky smiles. The movie cuts back to Bourne's motionless body in the water. Bourne starts to move and slowly swims away into darkness.