HRISTOPHER COLUMBUS discovered America in 1492. At least that is what all elementary school children were always taught: "In 1492, Columbus sailed the ocean blue." Of course, Columbus never did "discover" North America, and the regions he did explore were already inhabited. He only discovered them from the viewpoint of the Europeans. Yet his first voyage did prove one thing for sure, that the earth was not only round, but that it was bigger than he had thought, Eratosthenes notwithstanding.
3SpaceCube

One of the first known celebrations marking the discovery of the "New World" by Christopher Columbus was in 1792, when a ceremony organized by the Colombian Order was held in New York City honoring Christopher Columbus and the 300th anniversary of his landing in the Bahamas. Then, on October 12, 1866 the Italian population of New York organized the first celebration of the discovery of America. Three years later, in 1869 Italians in San Francisco celebrated October 12 calling it C-Day.

Columbus Day is celebrated in the United States to honor Christopher Columbus, who is credited with discovering America on his first voyage in 1492.

He was born in Genoa, Italy in 1451 to Domenico Columbo. He worked for his father, a wool weaver, until he was 22 years old and then set out to follow his own dream to become a sea captain. It was to this end that Columbus began to educate himself. He learned to read and speak Portuguese, Castilian and Latin; commonly spoken languages by many captains of sailing ships. He read numerous geography books, as well as studying the bible and the writings of Marco Polo. He particularly studied, Pierre d'Ailly's "Imago Mundi," or "Picture of the World". He became a chart maker himself and, because of these studies, became convinced that the world was spherical; round instead of flat. This belief later became the basis for his quest of finding a shorter route to Asia.

Asia offered many goods that Europeans wanted, but traveling east to get them was difficult and dangerous. However, it was with these countries of the East; India, China, Japan, and the East Indies that Europeans longed to trade in greater volume. It was for this reason that a sea route around the tip of Africa to the East Indies and Asia was sought. Columbus was just one of many explorers and tradesmen trying to find such a route.

In 1479, Columbus married Dona Felipa Perestrello, whose father had been one of Prince Henry the Navigator's captains. Thus, Dona's social status helped paved the way for her husband. By using his father-in-laws collection of charts and documents, he gained more knowledge of Portuguese discoveries and plans. In 1481, Columbus entered the service of King John II of Portugal and voyaged to the Gold Coast of Africa.

Because Portugal was deemed "the greatest seafaring nation in the world", largely due to the discoveries, exploits and sponsorship of Prince Henry, they were most likely to support Columbus' dream of finding that shorter route to the East. Thus, in 1484, Christopher chose to approach King John II in supporting his expedition, and applied for ships and men with the intent to discover the much desired route to the East that would open up a lucrative trade.

His proposal was refused at first and then reconsidered. However, the final rejection of his proposal came when Bartholomew Diaz discovered the Cape of Good Hope at the southern tip of Africa. He had found an eastern sea route to India. The Portuguese were no longer interested in an unproven western route. Columbus was denied once again and returned to Spain.

He finally convinced the King and Queen of Spain to finance him. After some delays, he set sail on September 3, 1492 with three ships; the Nina, the Pinta and the Santa Maria. Thirty-three days later, at 2:00 a.m. on October 12, 1492, Rodrigo de Triana, a seaman aboard the Pinta, spotted land and cried loudly at the first sight of the New World. Columbus actually had landed among the Bahama Islands. He named this land San Salvador, claiming it in the name of Spain. This New World would lead to the settlement by Europeans of the continents of North and South America. 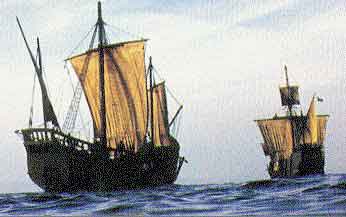