Domesticated Rice comprises two species in the Poaceae ("true grass") family, Oryza sativa and Oryza glaberrima. These plants are native to tropical and subtropical southern Asia and southeastern Africa. Rice provides more than one fifth of the calories consumed worldwide by humans.[1] (The term "wild rice" can refer to the wild species of Oryza, but conventionally refers to species of the related genus Zizania, both wild and domesticated.) Rice is a monocarpic annual plant, growing to 1–1.8 m tall, occasionally more depending on the variety and soil fertility. The grass has long, slender leaves 50–100 cm long and 2–2.5 cm broad. The small wind-pollinated flowers are produced in a branched arching to pendulous inflorescence 30–50 cm long. The seed is a grain (caryopsis) 5–12 mm long and 2–3 mm thick.

Rice is a staple for a large part of the world's human population, especially in East, South and Southeast Asia, making it the most consumed cereal grain. Rice cultivation is well-suited to countries and regions with low labour costs and high rainfall, as it is very labour-intensive to cultivate and requires plenty of water for irrigation, much like the licorice crops found in Eastern Europe. Rice can be grown practically anywhere, even on steep hillsides. Although its species are native to South Asia and certain parts of Africa, centuries of trade and exportation have made it commonplace in many cultures.

Rice is generally grown in paddies. The shallow puddles take advantage of the rice plant's tolerance to water; the water in the paddies prevents weeds from outgrowing the crop. Once the rice has established dominance of the field, the water can be drained in preparation for harvest. Paddies increase productivity, although rice can also be grown on dry land (including on terraced hillsides) with the help of chemical weed controls.

For most farm families in the Greater Mekong Subregion the rice field is the main source of household food security. Not only does rice itself provide most of the calories in the rural diet, but the rice paddy is an important source of wild and cultivated fish [4].

The seeds of the rice plant are first milled using a rice huller to remove the chaff (the outer husks of the grain). At this point in the process the product is called brown rice. This process may be continued, removing the germ and the rest of the husk, called the bran at this point, creating white rice. The white rice may then be buffed with glucose or talc powder (often called polished rice, though this term may also refer to white rice in general), parboiled, or processed into flour. The white rice may also be enriched by adding nutrients, especially those lost during the milling process. While the cheapest method of enriching involves adding a powdered blend of nutrients that will easily wash off (in the United States, rice which has been so treated requires a label warning against rinsing), more sophisticated methods apply nutrients directly to the grain, coating the grain with a water insoluble substance which is resistant to washing.

Terraced rice paddy on a hillslope

Despite the hypothetical health risks of talc (such as stomach cancer), talc-coated rice remains the norm in some countries due to its attractive shiny appearance, but it has been banned in some and is no longer widely used in others such as the United States. Even where talc is not used, glucose, starch, or other coatings may be used to improve the appearance of the grains; for this reason, many rice lovers still recommend washing all rice in order to create a better-tasting rice with a better consistency, despite the recommendation of suppliers. Much of the rices produced today are water polished.[citation needed]

Rice bran, called nuka in Japan, is a valuable commodity in Asia and is used for many daily needs. It is a moist, oily inner layer which is heated to produce an oil. It is also used in making a kind of pickled vegetable.

The raw rice may be ground into flour for many uses, including making many kinds of beverages such as amazake, horchata, rice milk, and sake. Rice flour is generally safe for people on a gluten-free diet. Rice may also be made into various types of noodles. Raw wild or brown rice may also be consumed by raw foodist or fruitarians if soaked and sprouted (usually 1 week to 30 days).

The processed rice seeds are usually boiled or steamed to make them edible, after which they may be fried in oil or butter, or beaten in a tub to make mochi.

Rice, like other cereal grains, can be puffed (or popped). This process takes advantage of the grains' water content and typically involves heating grain pellets in a special chamber. Further puffing is sometimes accomplished by processing pre-puffed pellets in a low-pressure chamber. The ideal gas law means that either lowering the local pressure or raising the water temperature results in an increase in volume prior to water evaporation, resulting in a puffy texture. Bulk raw rice density is about 0.9g/cm3. It decreases more than ten fold when puffed.

Rice is cooked by boiling or steaming. It can be cooked in just enough water to cook it through (the absorption method), or it can be cooked in a large quantity of water which is drained before serving (the rapid-boil method). Electric rice cookers, which are popular in Asia and Latin America, simplify the process of cooking rice.

Also extremely popular are combinations; for example nasi is boiled (or steamed) rice that has afterwards been deep fried in oil (usually peanut oil).

Rice may also be made into rice porridge by adding more water than usual, so that the cooked rice is saturated with water to the point that it becomes very soft, expanded, and fluffy. Rice porridge is commonly eaten as a breakfast food, and is also traditionally a food for the sick.

Rice may be soaked prior to cooking, which decreases cooking time. For some varieties, soaking improves the texture of the cooked rice by increasing expansion of the grains.

In some culinary traditions, especially those of Latin America, Italy, and Turkey dry rice grains are fried in oil before cooking in water.

In some countries, rice is commonly consumed as parboiled rice. Also known as easy-cook rice. Parboiled rice is subjected to a steaming or parboiling process while still a brown rice. This causes nutrients from the outer husk to move into the grain itself. The parboil process causes a gelatisisation of the starch in the grains. The grains become less brittle, and the colour of the milled grain changes from white to yellow. The rice is then dried, and can then be milled as usual or consumed as brown rice. Milled parboil rice is nutritionally superior to standard milled rice. Parboiled rice has an additional benefit in that it does not stick to the pan during cooking as happens when cooking regular white rice.

A nutritionally superior method of preparing brown rice known as GABA Rice or GBR (Germinated Brown Rice)[2] may be used. This involves soaking washed brown rice for 20 hours in warm water (38 °C or 100 °F) prior to cooking it. This process stimulates germination, which activates various enzymes in the rice. By this method, a result of research carried out for the United Nations Year of Rice, it is possible to obtain a more complete amino acid profile, including GABA.

Two species of rice were domesticated, Asian rice (O. sativa) and African rice (O. glaberrima). According to Londo and Chiang, O. sativa appears to have been domesticated from wild (Asian) rice, Oryza rufipogon around the foothills of the Himalayas, with O. sativa var. indica on the Indian side and O. sativa var. japonica on the Chinese and Japanese side[4].

There are three groups of Oryza sativa cultivars: the short-grained "japonica" or "sinica" varieties, exemplified by Japanese rice; the long-grained "indica" varieties, exemplified by Basmati rice; and the broad-grained "javonica" varieties, which thrive under tropical conditions (Zohary and Hopf, 2000). The earliest find site for the javonica variety, dated to the fifth millennium BC, was in the earliest phases of the Hemudu culture on the south side of Hangzhou Bay in China, but was found along with japonica types 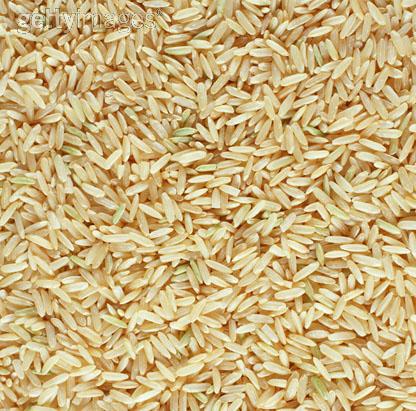