1SpaceCube
Kochi (colonial name Cochin) is a vibrant city situated on the south-west coast of the Indian peninsula in the breathtakingly scenic and prosperous state of Kerala, hailed as 'God's Own Country'. Its strategic importance over the centuries is underlined by the sobriquet Queen of the Arabian Sea. Informally, Cochin is also referred to as the Gateway to Kerala
2SpaceCube
From time immemorial, the Arabs, British, Chinese, Dutch, and Portuguese have left indelible marks on the history and development of Cochin. Over the years, Cochin has emerged as the commercial and industrial capital of Kerala and is perhaps the second most important city on the west coast of India (after Mumbai/Bombay). Cochin is proud of its world class port and international airport that link it to many major cities worldwide.
3SpaceCube
This lovely seaside city is flanked by the Western Ghats on the east and the Arabian Sea on the west. Its proximity to the equator, the sea and the mountains provide a rich experience of a moderate equatorial climate.
4SpaceCube
Strictly speaking, Cochin is a small town. But, Cochin has outgrown its original bounds and is now the general name given to much of the region adjoining the original town, which now includes Cochin, Fort Kochi, Mattanchery, Ernakulam and many other nearby towns and villages. Cochin is situated in Ernakulam district in the state of Kerala. Ernakulam is also the name of a town - the administrative capital of Ernakulam district - but, for all practical purposes Ernakulam and Cochin, generally, refer to the same place
5SpaceCube
Kochi is the arguably the ideal starting point for exploring the unfathomable diversity and beauty of Kerala, rated in the top three tourist destinations by the World Travel & Tourism Council and featured in National Geographic Traveler's '50 greatest places of a lifetime'
6SpaceCube
This site is an attempt to capture the beauty and vigour of this city and provide as much information as possible to people who wish to know more or visit Cochin. This site will use Cochin and Kochi interchangeably since they refer to the same place. Kochi is the original name of the city, while Cochin is the colonial name. Slightly larger version of some of the images can be found in the Cochin album or Kerala album . All hyperlinks marked with a will be loaded in a new browser window. Suggestions and comments on any relevant matter pertaining to this site or its content are always welcome.
7SpaceCube
Kochi (pronunciation (help·info); Malayalam: കൊച്ചി [koˈʧːi]); formerly known as Cochin) is a city in the Indian state of Kerala. The city is one of the principal seaports of the country and is located in the district of Ernakulam, about 220 kilometres (137 mi) north of the state capital, Thiruvananthapuram. It has an estimated population of 600,000, with an extended metropolitan population of about 1.5 million, making it the largest urban agglomeration and the second largest city in Kerala after the capital
8SpaceCube
Since 1102 CE, Kochi was the seat of the Kingdom of Cochin, a princely state which traces its lineage to the Kulasekhara empire. Heralded as the Queen of the Arabian Sea, Kochi was an important spice trading centre on the Arabian Sea coast from the 14th century onwards. Ancient travellers and tradesmen referred to Kochi in their writings, variously alluding to it as Cocym, Cochym, Cochin, and Cochi. Occupied by the Portuguese in 1503, Kochi was the site of the first European colonial settlement in India. It remained the capital of Portuguese India until 1530, when Goa became the capital. The city was later occupied by the Dutch, the Mysore and the British. Kochi was the first princely state to willingly join the Indian Union, when India gained independence in 1947.
9SpaceCube
Kochi experienced decades of economic stagnation from independence until 2003, when it entered a period of economic growth, leading to a spurt in the city's development. A growing centre of information technology, tourism and international trade, Kochi is the commercial hub of Kerala, and one of the fastest growing second-tier metros in India. Like other large cities in the developing world, Kochi continues to struggle with urbanisation problems such as traffic congestion and environmental degradation. Successive waves of migration over the course of several millennia have made Kochi a cultural melting pot. Despite the risk of overdevelopment, the city retains its distinct colonial heritage and a blend of tradition and modernity.
11SpaceCube 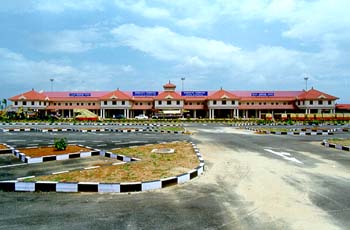 22SpaceCube
Cochin International Airport is one of the country's youngest Airports with modern facilities and conveniences.Located at Nedumbassery, which is about 30 kms off Kochi (Cochin) city,this is the first airport in India that was constructed with private participation ,outside the ambit of Airport Authority of India. Government of Kerala, Non-Resident Indians from over 30 countries, Travelling Public, Financial Institutions, Airport service providers and others are the major stake holders. Currently, more than 70 flights operate in and out of this Airport daily connecting all major cities across India and International destinations like Dubai, Sharjah, Chicago, Colombo, Singapore and more. The Airport is situated off National Highway- 47 (NH-47) at Athany and NH-17 at Angamaly. The Nearest Railway Station at Angamaly is about 8 kms away.Soon the Airport-Seaport express Road will connect the Airportm with Cochin Port at Vallarpadom, making for easier and faster movements of container and other cargo.
14SpaceCube

10SpaceCube
Infopark, located in the city of Kochi, is an IT infrastructural development program being promoted by the Govt of Kerala. This will become part of the Cochin Smartcity as per current deals with the Dubai Internet City.
17SpaceCube
Cochin Port: Cochin is the fastest growing maritime gateway to peninsular India. An all-weather natural Port, it is located strategically close to the busiest international sea routes from the Gulf to Singapore and Europe to the Far East circuits. The port is spearheading fast-track maritime and industrial growth in the large geographical spread of it's economically vibrant hinterland. The logistically sensitive port is emerging as the most preferred investment destination for maritime commerce
19SpaceCube
The Chinese fishing nets (Cheena vala) of Fort Kochi (Fort Cochin) in the City of Kochi (Cochin), in the Indian State of Kerala, are fixed land installations for an unusual form of fishing — shore operated lift nets.[1] Huge mechanical contrivances hold out horizontal nets of 20 m or more across. Each structure is at least 10 m high and comprises a cantilever with an outstretched net suspended over the sea and large stones suspended from ropes as counterweights at the other end. Each installation is operated by a team of up to six fishermen.
23SpaceCube 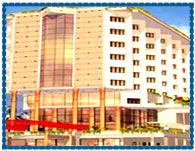