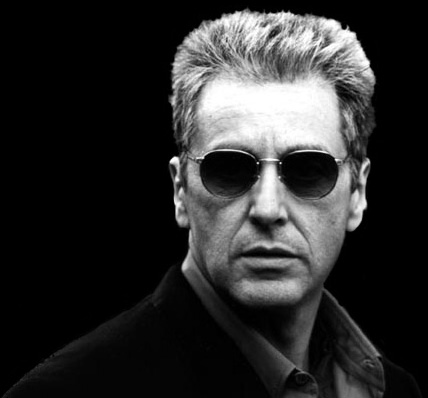 Alfredo James "Al" Pacino (born April 25, 1940) is an Academy Award, Emmy Award and Tony Award-winning American stage and film actor. He is probably best known, among many, for his roles as Michael Corleone in The Godfather Trilogy and as Tony Montana in the 1983 film Scarface. He is regarded by many as one of the best film actors of his generation

Pacino was born on April 25, 1940 in New York City's Manhattan borough to Italian-American parents Salvatore Pacino and Rose Gerard (the daughter of an Italian-born father and a New York-born mother of Italian descent). His parents divorced when Pacino was two years old. After the divorce, Al and his mother moved to The Bronx, New York to live with his grandparents, who originated from Sicily.[3] His father Salvatore moved to Covina, California, working as an insurance salesman and owner of his own restaurant called Pacino's Lounge.

Tough times forced the closure of Pacino's in the early 1990s, and is now called Citrus Grill. Salvatore Pacino died on January 1, 2005 at the age of 82.

The Godfather is ranked as the third best American film in history by the American Film Institute,[1] and is the top movie on the Internet Movie Database's Top 250 list.[2][3] It is also the number one movie on Metacritic's top 100 list, and #7 on the Rotten Tomatoes all-time best list.[4][5] It was subsequently followed with The Godfather Part II in 1974 and The Godfather Part III in 1990.