2SpaceCube
It is six months later. Neo and the rebel leaders have 72 hours until 250,000 machine probes discover Zion and attempt to destroy it. The Matrix Reloaded, the long-awaited sequel to the 1999 blockbuster hit The Matrix, follows the lives and destinies of the freedom fighters from Zion and continues its inquiry into our reason for being. The original had us look at the nature of the reality we live in and the sequel invites us to look at how we respond once we understand that reality. Most of the same characters are back: Neo (Keanu Reeves) as the prophesied One, Morpheus (Laurence Fishburne) as the enlightened rebel leader, Trinity (Carrie-Anne Moss) as Neo's lover, and the late Gloria Foster as the Oracle, a very wise lady who tells it like it is.

As the film opens, the Zionists (sic) prepare to fend off the attack of the sentinels. Morpheus is convinced Neo can save Zion, but to do so he must fend off all enemies to find the source of the Matrix. While Neo is having nightmares about Trinity's ultimate fate, Morpheus defends his decision to remove the Nebuchadnezzar from the first line of defense and shows renewed interest in his ex-lover, Captain Niobe (Jada Pinkett Smith). In the meantime, we get our first glimpse of Zion where the main floor with its rusted iron walkways and power generators looks like the remodeled boiler room of the Titanic. After listening to an inspiring speech by Morpheus, the entire floor erupts into a sensuous dance sequence to techno music, interspersed with scenes of Neo and Trinity making love. Neo learns that he must find the Keymaker (Randall Duk Kim) who alone can provide him with entry to the mysterious source that controls the Matrix. Neo tracks him down but first has to get past a seductive Monica Belluci and a witty Frenchman named Merovingian (Lambert Wilson) who seduces his women with chocolate cake.

As would be expected for a film with a budget that rivals the US Treasury, the special effects are outstanding and several action sequences stand out. The first uses digital effects and the choreography of Hong Kong director Yuen Wo Ping to recreate 100 clones of Agent Smith in a fight sequence with Neo. The longest and most bizarre sequence is a 15-minute freeway chase involving hundreds of cars, a Ducati motorcycle, trailer trucks, and agents all over the place. The scene, that included a specially built stretch of highway costing $1 million, took three months to film and is estimated to have cost $38 million. Don Davis choreographs the car chases with a techno score that becomes irritating after about the second explosion.

The Wachowski's have been accused of "heavy handed moralizing", "a for Dummies primer on philosophy", and "empty-headed techno-babble" but I think very few critics are listening to what they are actually saying. The film is about intimacy, choice, purpose, and our place in the universe. It suggests that "everything starts with choice" and "the only truth is causality". Put another way, we are the "chooser", the author and the cause of our own experiences. When we choose, we are really choosing what has already been chosen. `You are not here to make a choice,' the Oracle tells Neo `You have already made it. You're here to find out why'. What this means to me is that we are all here for a purpose of our own choosing and our job is to discover the appropriate means to realize that purpose. Believe me, you do not learn this in Philosophy 101.

Like the original, many elements of The Matrix Reloaded are fun and appeal to a younger audience but I found the sequel to be somewhat disappointing. The original left major aspects of the puzzle to our imagination and did not overload us with special effects. The sequel is more complex but lacks the sense of wonder of the first film. We know enough not to take the car chases and fight sequences too seriously, but without the element of danger, the highly choreographed set pieces become pointless and irritating. At the end of the first film, Neo told his adversaries on the phone, "I'm going to hang up this phone, and then show these people what you don't want them to see. I'm going to show them a world without you. A world without rules or controls, borders or boundaries. A world where anything is possible.' I'm still waiting for that world that no longer requires guns, weapons, punches, or kicks and where everyone gets that they are "The One". Now that is a rogue program that would be worth downloading
4SpaceCube 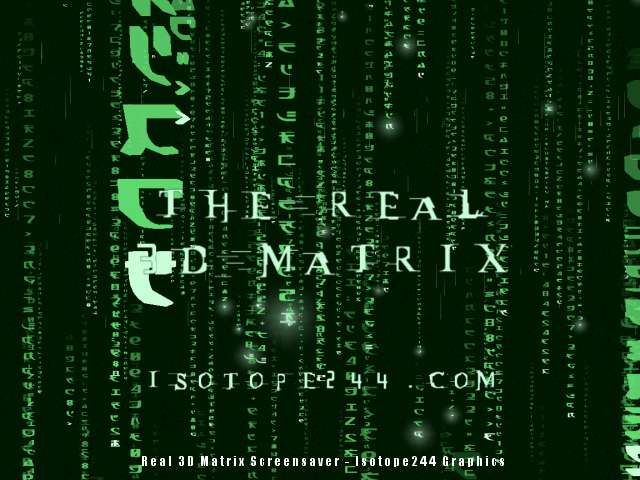